Nine people showed up for the bird walk on November 9 led by Joe Coleman and Jane Yocom at the Banshee Reeks Nature Preserve in central Loudoun County. In spite of a starting temp of 22, it was a very pleasant and productive morning of birding (38 species) due to the extensive sun and lack of wind.

While there were few birds of prey at first, once it warmed up a bit and some thermals had developed, we saw two adult Bald Eagles soaring together and a juvenile Bald Eagle near a Red-tailed Hawk along with five Red-shouldered Hawks. 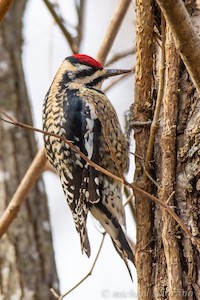 Yellow-bellied Sapsuckers were around in nice numbers including two dull hatch-year birds and three adults, both males and females. Both kinglets, especially Golden-crowned, were well-seen. A Hermit Thrush was seen by only one participant but another was heard by several of us.. There were numerous Cedar Waxwings eating fox grapes and in one spot, cherries.

All in all it was a very pleasant morning of birding in Virginia’s northern piedmont with the temperature rising to a balmy 38 by the time we’d finished.

A complete list of all the birds observed at Banshee Reeks during the walk is listed below or can be seen on eBird at: https://ebird.org/checklist/S61295463.

This regular monthly free bird walk (every 2nd Saturday) at the Banshee Reeks Nature preserve is sponsored by the Loudoun Wildlife Conservancy  & the Friends of Banshee Reeks. You can also join us for our regular (every 4th Sat except December) at the Blue Ridge Center for Environmental Stewardship in northwestern Loudoun County near Harper’s Ferry and our regular third Sunday walk (except December) at Bles Park.