To better understand how salt affects aquatic life, Loudoun Wildlife’s Stream Team partnered with the Izaak Walton League of America to start collecting sodium chloride data in the fall of 2021 at some of our benthic macroinvertebrate sites. A team of nine volunteers collected nearly 100 data points at 13 locations for our 2021-2022 monthly and Winter Salt Watch program.  (See data below.)

What is sodium chloride?
Sodium chloride comes from road salt or brine applied to our roadways and sidewalks in the winter. Salt gets into our streams when snow and ice melts from salt-treated roads and walkways or rain washes it away. Even if there doesn’t appear to be a stream nearby, the runoff from roads and parking lots feeds into storm water drains that empty into our waterways.

This salty water flows downstream, but also ends up sinking into the groundwater supply, which feeds our streams during the summer months. This means that we can see elevated chloride levels in our streams even when salt isn’t being actively applied.

Why are sodium chloride levels being monitored?
While road salt keeps us safe on icy roads and sidewalks, it can also pose a threat to fish and wildlife, as well as humans. Fish and bugs that live in freshwater streams can’t survive in salty water and many people depend on local streams for drinking water. Water treatment plants are not equipped to filter out the extra salt, so it can end up in your tap water and even corrode your pipes.

Where are sodium chloride levels being monitored?
We conducted testing at the Broad Run in Willowsford, the Goose Creek site near Lansdowne, four sites along the Tuscarora in the Leesburg area, two sites along Town Branch in Leesburg, Beaverdam Run in Ashburn, two sites along the South Fork of the Catoctin in Purcellville, an unnamed tributary in Round Hill, and Sycolin Creek off of Evergreen Mills Road. 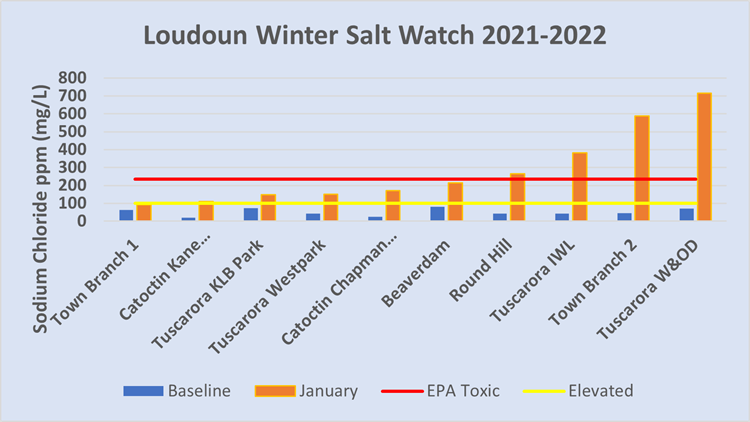