Ectotherms in Winter: How Do Reptiles and Amphibians Survive?

by Emily B. Cook

The challenge winter represents for most animals is not insignificant. They are, however, quite well-equipped and able to navigate potentially sub-freezing temperatures and brutally harsh weather. This is especially true for reptiles and amphibians, which are ectothermic, and not only lack a thick fur coat or downy feathers to insulate their bodies, but must draw from their external environment and adapt to maintain an adequate body temperature. So how do reptiles and amphibians survive? 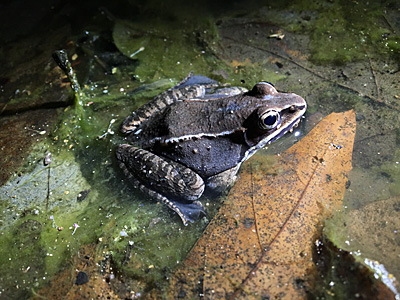 Wood Frogs weather winter’s cold by freezing. They stop breathing, their hearts stop, and they appear dead — until spring, when their bodies thaw and they begin feeding and mating again.
Photo by Sarah Steadman

This is no easy task. Ectotherms often must make great sacrifices to create the necessary conditions for survival. Terrestrial species are subject to frequent sub-freezing temperatures, wind chill, and precipitation. Aquatic species must navigate frigid waters, which often solidify and limit the availability of oxygen. In addition, they are subject to starvation, as much of their food supply is limited, and often for the very same reason — their food sources need to hibernate or die back in order to survive as well.

Snakes are at great risk when the temperature falls below freezing. Contrary to popular belief, snakes do not actually hibernate during the cold winter months. Instead, they conserve energy through a process called brumation, a slowing of their metabolism and the preservation of energy by limiting their movement. Snakes basically find a place to hunker down and wait out the storm in order to escape frigid temperatures.

Snakes will attempt to return to the same den or cave used in previous years for their brumation. There may be many snakes — often as many as a hundred or more — in one den. This nest is called a hibernaculum. Several species, such as the Eastern (or Black) Ratsnake (Pantherophis alleghaniensis), Eastern Copperhead (Agkistrodon contortrix), and Timber Rattlesnake (Crotalus horridus), among others, are known to frequently share the same hibernaculum during brumation. This larger group of individuals produces more energy and, when the snakes are closely intertwined, creates an opportunity to maximize heat retention. Whether multiple species or many of the same, this process can be essential to the snakes’ survival. The snakes’ metabolism will slow to the point that they do not require nourishment while brumating, so unless there is an unusually warm weather spell that lures them out for a sunbath on a hot driveway, they will remain in this hibernaculum the entire winter.

If a snake is unable to return to its den, it will try to find an alternative such as a hollow log, abandoned rodent tunnel, or even a large pile of dry leaves. If appropriate shelter is not found before the temperatures drop, the snake will likely not survive.

Other terrestrial reptiles, such as turtles, frogs, and toads, are also remarkably adaptable in dealing with the winter’s challenges. Turtles and toads hibernate in a manner similar to that of snakes — by digging their way down beneath the leaf litter, under logs, or by making dens and burrows. They, too, slow their metabolism to conserve energy, which is the key to survival.

There are, however, a few species of terrestrial frog that perform some pretty amazing physical feats in order to survive the harsh winter months. In particular, Spring Peepers (Hyla crucifer) and Wood Frogs (Rana sylvatica) are not as efficient as some of their relatives at burrowing deep below the frost line, so they often succumb to the freezing temperatures. Their bodies virtually freeze solid and their hearts stop beating. To the naked eye, these frogs appear completely frozen. Yet, due to the high concentration of glucose in their internal organs, which serves as a sort of antifreeze and also provides essential nourishment during this physiological phenomenon, they slowly thaw and “spring” to life once the sun peeks through the trees and temperatures rise above freezing. While this process is easily explained scientifically, it still seems like a little bit of magic that these tiny frogs essentially come back to life each spring to find their mate.

All ectotherms require oxygen for survival and have to be concerned about the temperature, but aquatic animals face another type of challenge altogether — the possibility that the water surface will freeze and they will not be able to reach their oxygen source. Aquatic turtles, however, are ready for the challenge and can physically adapt when their habitat ices over. As water temperatures plummet and the pond’s surface becomes inaccessible, the turtle’s body temperature drops and its metabolism dramatically slows. The turtle often settles at, or close to, the bottom of the water source, its movements lethargic and at times nonexistent.

While this behavior is similar to that of many other ectotherms in helping preserve energy, the turtle has another trick up its sleeve. Similar to the way a fish draws in oxygen through its gills, the turtle is able to absorb oxygen from circulating water as it passes over its skin. The tail of the turtle is especially efficient at absorbing oxygen due to the fact that it is extremely vascular. This process is called cloacal respiration. Turtles can literally breathe through their butts, which may seem a bit odd but is an adaptation that is invaluable to the survival of the turtle. As long as the water remains oxygenated, the turtle can “breathe” without ever reaching the surface.

Adaptability is critical in the eternal quest for survival in the natural world. Every mammal, reptile, bird, fish, and amphibian is equipped with special super-powers that ensure the future of the species, even during harsh, uninhabitable conditions. So the next time you are snuggled up in your blanket during a blustery winter storm, consider the enormous hurdles your reptile and amphibian friends face while they are hibernating or brumating their way through until spring.