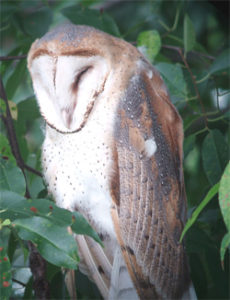 To support our local Barn Owl population, the Banshee Reeks Chapter of the Virginia Master Naturalists has begun a project to install and monitor well-designed nest boxes in appropriate habitat. Everyone is welcome to join the effort!

Our project is modeled on one started by Roger Jones in Rappahannock County. Roger is well-known for his work with kestrels since the 1970s, and for publishing the Kestrel Karetakers newsletter. In 2007, Roger and his associates installed six Barn Owl boxes in abandoned silos and unused barns. In the beginning they made boxes from apple crates, an old trunk, used pine boards, and scrap plywood. The boxes always had two chambers, one for nesting and one for roosting. If they were open to the elements, as in a silo without a roof, the boxes were built with a top cover. As the project saw success, they added better boxes made from new plywood (see www.scvas.org/pdf /cbrp/BuildingBarnOwlBoxes.pdf).

Over the years, Roger has installed 19 Barn Owl boxes. The boxes were monitored and some were relocated because they weren’t successful. Others were lost when a barn or silo was torn down. In 2009, only two years after beginning the project, Roger and his team banded 31 young owls. Between 2009 and 2015, they banded comparable numbers of owls of all ages ranging from hatchlings to those ready to fledge. They were even lucky enough to band several adults on the nest.

We can have the same success in Loudoun County. Barn Owls prefer open grasslands, meadows and marshes but agricultural fields and suburban areas are acceptable if there are open spaces nearby with enough mice and voles to feed a hungry Barn Owl family. Nest boxes can be installed in or on unused or lightly used silos, barns and similar structures, or attached to trees or poles. The boxes should be monitored throughout the nesting season by watching for adult owls around the box at dusk and the presence of pellets and other debris below the box. There are several ways to help. You can install and maintain a nest box on your property or help others to do so, contribute materials, build boxes, monitor boxes, or collect and report data. If you already have an active nest on your property, please let us know so we can include it in our database.

This is a project for patient people. It may take several years for Barn Owls to nest in your box. But the sight of these ghostly birds gliding silently through the night sky or peering down from the top of a silo is worth the wait.

Permits aren’t required to install and monitor the boxes, but it’s illegal to disturb an active nest or handle the birds without a permit. For more information about the project, contact Liz Dennison at 703-309-2961 or at Liz@Dennison.bz. We provide nest box plans, assist in selecting a site and installing the box, and help you monitor and report progress. If possible, we’ll band nestlings.