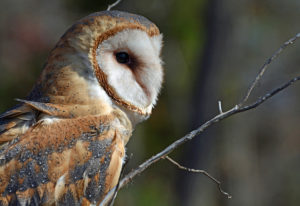 As a wildlife veterinarian and rehabilitator, most of my experience with barn owls has been gained in a hospital setting. I care for them when they become sick or injured, which is how I’ve learned first-hand about some of the hazards they face in their environment.

Barn Owls are one of my favorite species due to their monkey-like face, beautiful gold and white feathers, and their entertaining behaviors. When approached by humans or otherwise feeling threatened, Barn Owls will weave back and forth, shake their head in a motion called “toe dusting,” and if that doesn’t scare you away, they will make a machine-like hissing sound or give a loud frightening scream.

Barn Owls can appear quite large with their long legs and wings, but they weigh only a pound and are often predated. Their major predators are other owls and raccoons, and injured barn owls found on the ground will often have bite or talon wounds. Nestling Barn Owls are sometimes rescued from barns when, due to a lack of appropriate nesting sites, they end up on the floor of a barn or silo where the young can be killed by raccoons, opossums or cats.

The majority of injured Barn Owls I have treated have had fractured wings or legs, usually as a result of being struck by a vehicle. Owls will often hunt alongside roadways where litter tossed from vehicles attracts the rodents they like to eat to the side of the road.

By far, the biggest threat to Barn Owls living in proximity to humans is mouse and rat poison. Barn Owls eat almost exclusively rodents, making them very important for pest control, but the use of rodenticides to control rodent populations will also kill the owls and other predators that eat the poisoned rodents. It’s a terrible irony that these rodent poisons kill the very predators that control rodent populations.

The most commonly used rodenticides are anti-coagulant poisons that inhibit an enzyme in the coagulation process, and this prevents blood from clotting. Poisoned rodents, and the owls who eat them, die from hemorrhage and blood loss, usually within three days of consuming a toxic dose of the poison. Even non-fatal doses of these rodenticides can remain in an animal’s system for as long as three weeks, and will accumulate to become a lethal dose in the predator eating them.

Because these poisons have the potential to kill many species of non-target wildlife, especially predators such as Barn Owls, they are a poor choice for rodent control. Rodent glue traps also kill a large number of non-target species including snakes, bats and birds, and should also be avoided. A new rodent sterilization drug called ContraPest has been recently introduced and is being tested on rats in New York City, but until it is determined whether this is a safe alternative, the best option to control mice and rats is to use live traps, or if those don’t work, the old fashioned snap-traps carefully placed where only mice and rats can access them.

Increased awareness of the threats faced by wildlife can help everyone make their property more wildlife friendly. Creating an environment that is safe for Barn Owls is a great way to encourage these efficient rodent predators to live on your property.