This past summer, I got a text on my phone. It was from Belinda Burwell, local wildlife rehabilitator and director of Wildlife Veterinary Care. The text read, “Are you available to rescue a baby Barn Owl in Purcellville?” Of course I was. Life matters. So, I called Belinda back, got in touch with the property owners, Liz and Steve, and headed over to make the rescue.

The plywood platform in the silo where the nest had been had decomposed and finally fell. Inside the silo was water a few feet deep, but somehow the chick managed not to fall in and instead was huddled in an anteroom adjacent to the barn. 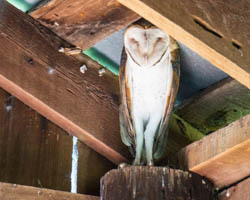 Liz and Steve had just purchased the property. This all happened on day two of their moving in, but luckily their kids were within earshot when the platform fell and went to see what happened. As Liz and I talked, she said that the previous owner had mentioned a “big white bird” that lived in the barn. So, we climbed up a ladder staircase to the second floor of the old barn to take a look. I gave a quick scan of the beams but my eyes were drawn to the floor – owl pellets, lots of them! Just as we were commenting on the pellets, a silent “whoosh, whoosh” of air went over our heads. It was our ghost bird: a big beautiful Barn Owl exited through an open window.

Recognizing that we had just disturbed the roost, we quickly left and went back down to the baby owl. We assessed the situation and called Belinda. Due to the precarious situation with the water in the silo, no visible way for the adult to get to and feed the baby, and both outdoor cats and signs of raccoons using the barn, we gathered the little one up and took it to Belinda for rehabilitation care.

If the platform had been intact, we would have put the owlet back on the platform for the parent to care for, but in this case the nesting spot was gone, and as it turns out Barn Owls are very particular about their nest spot. Conservationists with The Barn Owl Trust, the organization that has studied Barn Owls for almost 30 years, have found that even if an owlet is just a few feet away from the nest spot, the parent will ignore it and not feed it. So, if a Barn Owl owlet falls from a nest before fledging, it must be put back in exactly the same nest spot or it will die of neglect.

Upon inspection, Belinda found that this owlet was dehydrated and starving, so indeed it had not been fed for a few days. A day or so later, I received another text. This time it was from Liz, the property owner. It read, “There is another baby owl in the same room. Any chance you could come get it?” Of course I could. This one was a bit more feisty than its sibling. Feisty is a good sign. I took it to Belinda and once again, it too was in real need of her care. She placed the two in the same enclosure and reported that at first they hissed at each other but then as she went to feed them, they united and hissed at her – and happily took the food. 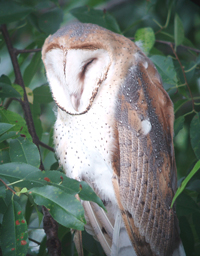 So what do Barn Owls eat? Rodents! Ninety percent of their diet is some form of rodent: voles, shrews, and mice. Those are the favorites. An adult Barn Owl will eat 3 to 4 rodents per night. During breeding season when there are babies to feed, they will feed each owlet several rodents per day! The amazing fact is that just one pair of nesting Barn Owls and their chicks will consume more than 3,000 rodents per year! They are far more effective than barn cats, which kill a significant number of beneficial wildlife and especially take a toll on birds.

Barn Owls have the most sensitive hearing of any animal tested. This, combined with their lightweight body and a wing load that allows them to fly very slowly or even hover on the slightest drafts, makes them very effective predators, able to pinpoint rodents hidden in high grasses. When they find a vole or mouse, they reach down with their long legs and talons and pull out their meal.

I mentioned earlier that inside the barn, we noticed the owl pellets. Owl pellets are not excrement. They are something different – something special. Owls eat their prey whole but cannot digest hair or bones. So, these parts are collected in the owl’s gizzard. They are compacted and then, when the time is right, regurgitated.

A neat thing about these owl pellets is that Barn Owls do not build any sort of nest. Instead, they use platforms, tree cavities, abandoned buildings, church steeples and specially designed nest boxes. Rather than bring in nesting materials, Barn Owls simply cough up owl pellets right onto the nesting spot. These pellets are made of soft mouse and other rodent fur, along with tiny bones. As the owl pair is going through courtship and pair bonding, they will roost together at the nest site. If it is a new nest site, the female may scratch at the pellets to break them up, making a soft mat. Barn Owls will use the same nest site year after year so this mat of pellets becomes compacted and is added to as more owl pellets are regurgitated over the years. This becomes the nest.

Barn Owls are not fierce birds despite their hissing and frightful calls. They may be preyed upon by Great Horned Owls and actually have both a high mortality rate and relatively short lifespan. A typical Barn Owl only lives about four years, and 70 percent die in their first year of life. Only one in ten birds will reach the ripe old age of 10 or older.

They have a strategy for overcoming this high mortality rate, however. They start breeding at age one and while they typically nest in the spring, they have been found nesting in every month of the year. Early spring egg-laying is associated with habitat of plentiful food. Less experienced birds seem to breed later in the year. When they do nest, they lay anywhere from 4-11 eggs, which is a lot for a raptor. Incubation starts as soon as the first egg is laid, so the chicks hatch over a period of time rather than all at once. This gives the parents a staggered feeding demand during the early part of the nesting period. In a typical clutch, there will often be eggs that don’t hatch and young that don’t survive. Hatching success averages just four eggs per nest, and fledging success averages just 2.5 owlets. With only 30 percent surviving their first year, there may only be one or none surviving from a given nest beyond that first year.

The driver for having a successful Barn Owl population, our natural rodent control, is of course habitat, and with that, prey abundance. Barn Owls thrive where there are tall grassy fields, rough meadows and marsh habitats where voles and mice can live. Each individual owl has highly detailed knowledge of its home range and food availability and will travel up to 2-3 miles for food. In the first year having this knowledge is especially critical. As juveniles of 8-14 weeks old they already display hunting instincts, and will hunt on their own as they explore the home territory.

Barn Owls hunt in almost complete silence. Their feathers are specially adapted with micro-sized “hooks and bows” that buffer the air and create “micro-turbulences” that are hard to detect by ear. Take a moment to look at this two-minute video that compares fight sound between pigeon, falcon and Barn Owl. This silent flight comes at a cost, however. Their feathers do not have any water resistance to speak of, and in order to be light, quiet fliers, they are not able to store much body fat. As a result, they are not able to hunt in heavy rain and often fall victim to starvation during extended periods of severe weather.

Even with this Achilles’ heel, it is the abundance or lack of prey that has the highest impact on survival. In bad weather, a seasoned Barn Owl will know its best foraging spots, fy directly to that location to feed and return back to its sheltered roost. Similarly, prey abundance affects whether or not Barn Owls will nest and lay eggs since it takes a lot of mice and voles to feed a hungry family.

For juvenile birds, like our little owlets from this summer, the highest risk for starvation is during dispersal when they don’t know the habitat yet and are learning the good feeding areas. Mortality for Barn Owls peaks from December through March because rodents don’t move as much in these colder periods, making it difficult to find the prey, and heavy snow cover may make it impossible to hunt at all.

During the winter, Barn Owls like to conserve energy by hunting from perches rather than hovering. Adding 10-15′ tall posts that they can perch on is a nice addition to an area where Barn Owls are being encouraged. They will also take advantage of mice found right inside their roosting or nesting barns and eat those during winter and other rainy weather when they cannot otherwise go outside to hunt. Rodent poison in and around buildings poses a serious threat to Barn Owls in that as they eat the rodents, the owls become poisoned themselves.

Barn Owls are strictly nocturnal, and a Barn Owl seen hunting during the day is one that is desperate for food. If you have Barn Owls roosting on your property, it is important not to disturb them during the day and instead give them their privacy. In addition to roosting in barns, Barn Owls may fnd a safe stand of evergreens or other trees to roost in. They have even been spotted in gaps in hay bales where they can keep out of the elements and stay warm in winter. If Barn Owls are roosting or nesting at a location that you would prefer they not be in, you can put up nest boxes, but it may take time for the bird to accept the box, if at all.

Barn Owls are not very territorial, and in fact, a number of Barn Owls may use the same hunting and roosting locations. It is even possible to put up multiple nest boxes properly spaced several hundred yards apart to encourage a population. Barn Owls are a widely distributed species, occurring across our country, Europe and beyond, but their presence is spotty. In the end, it’s all about the habitat and the prey available. We are lucky that we still have them here in Loudoun. They are our Ghost Bird, our silent fliers, our rodent control. They shriek through the night, and leave pellet presents as a record of the work they have done to keep voles, mice and other rodents in check.

But what happened to the two little owlets from our summer encounter? Well, as I write this at the end of August, these two feisty siblings are growing up strong in Belinda’s care. They gobble up mice, hiss and preen. As we head into fall, there will be a well-planned soft release that enables the birds to learn the territory before having to find food on their own. They will go back to the wild and the “Ghost Birds” will fly.

If you have good Barn Owl habitat and want to help build their populations, please contact us. They are very good neighbors.