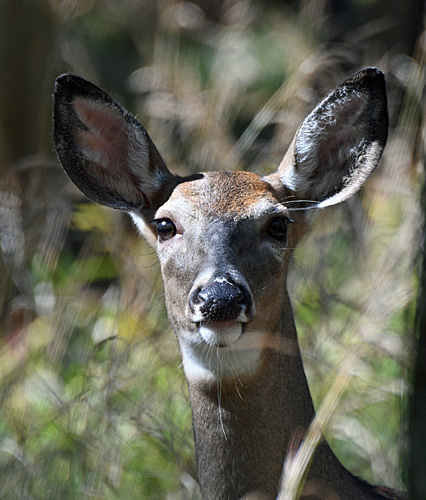 Love them or hate them, whitetails have become ubiquitous in much of the country, and Loudoun County is no exception. Few animals inspire as much controversy and divided opinion as these prolific ungulates.

The Virginia Department of Wildlife Resources estimates that in the early 1600s the state’s White-tailed Deer population was 400,000 to 800,000. Estimates for the North American population at that time range from 24 to 62 million, though there were probably significantly fewer deer prior to 1500, when introduced diseases began to radically reduce Native American populations. Whitetails were vitally important to Native Americans in the East, and their activities affected deer populations. They hunted deer for food, clothing, cordage, and other uses but also actively managed the landscape with fire to enhance deer habitat.

With European settlement came unrestricted hunting, land-use changes, and habitat loss that led to the near extinction of whitetails by the early 1900s. They were still uncommon enough in the early 1960s that my mother offered a quarter to the first kid to spot one on family outings to the Skyline Drive. Today, an estimated 850,000 to 1 million deer roam the commonwealth, with around 30 million nationwide. Deer are difficult to count, so these estimates should be taken with caution. Nonetheless, this turnabout is a major conservation success story, but one that has led to some of our more contentious human-wildlife conflicts.

A number of factors led to  the rebound of whitetails in Virginia. A combination of commercial hunting bans, sport hunting regulations, importation of deer from elsewhere in the country, and habitat restoration allowed whitetail numbers to recover. Also, European settlers eliminated two major deer predators: Gray Wolves and Mountain Lions. The remaining natural predators, primarily Coyote, Black Bear, and Bobcat, prey mostly on fawns. Extensive suburban development since the 1950s has created large expanses of hunter- and predator-free whitetail habitat well stocked with food in the form of garden and landscape plants.

White-tailed Deer are members of the deer family Cervidae, which in North America also includes Mule Deer, Caribou, Moose, and Elk. Adult male whitetails, called bucks, weigh about 200 to 300 pounds, and females, or does, range from about 150 to 250 pounds. Their coats are predominantly reddish-brown in summer and grayish-brown in winter. The winter coat helps them blend in with winter vegetation, while the summer coat camouflages surprisingly well against green vegetation.

Whitetails are a prey species and are adapted to avoid predators. Large, independently movable ears and an excellent sense of smell give them early warning of a predator’s approach. Eyes on the sides of their head provide a wide field of view, though at the sacrifice of depth perception. To compensate, deer often bob their heads to gauge distance when looking at potential threats. If a predator gives chase, the deer’s long legs enable them to flee at 30 to 40 miles per hour and make jumps eight or more feet high and 30 feet across. 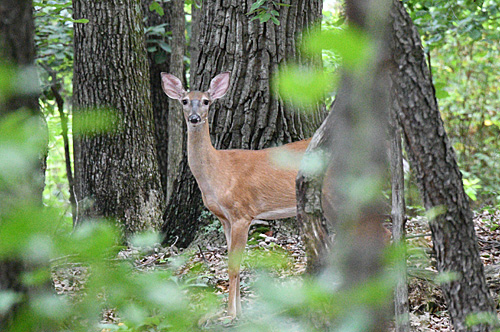 A doe pauses cautiously on her way across a local wood after spotting a human with a camera.
Photo by Gerco Hoogeweg

The white underside of the tail, from which whitetails get their name, is another defense, though there is debate as to just how it works. Whitetails hold their tail down against their hindquarters most of the time, but if they detect a threat, they raise it to reveal the bright white underside in a behavior called flagging. Some experts interpret flagging as a warning to other deer that danger is near. Others argue that flagging is a signal to a predator that it has been detected and should move on to less alert prey. Another hypothesis holds that flagging confuses a predator or makes it difficult for it to focus on one target amid a group of flagging deer. Whitetails also sometimes stomp the ground with a foreleg and snort loudly to warn of danger.

Stimulated by increasing day length, bucks start growing a pair of antlers each spring. Antlers are composed of bone and are the fastest growing tissue of any mammal. That growth is nourished by a covering of fuzzy skin, called velvet, which provides a blood supply. Antlers reach full size and harden as the mating season approaches and bucks rub them against shrubs or small trees to help shed the velvet. They use their antlers primarily to spar with each other over access to receptive does, although sometimes also for defense against predators. Bucks drop their antlers in winter after the mating season.

In Virginia, White-tailed Deer breeding occurs mainly from October through December, with a peak in November. Shortening day length causes their pineal gland to release melatonin, inducing estrus, or heat, in does and rut in bucks. In bucks, this causes rising testosterone levels, swelling in the neck, and hardening of the antlers. They also become solitary and aggressive towards other bucks … and sometimes people!

Whitetails of both genders use pheromones, or scents, to communicate various information to other deer, including territory, status, condition, and availability for mating. They produce pheromones from glands on their head, legs, and feet, and rub them onto shrubs and trees. Bucks also paw the ground to make scrapes where they leave scent marks. Scent marking is usually accompanied by urination.

Most whitetail mating occurs during a very narrow window, which concentrates births in a brief period in late spring. New fawns are highly vulnerable to predators, and this concentration presents predators with more fawns than they can eat, ensuring that a large number will survive. Also, plentiful, highly nutritious late-spring plant growth allows does to produce more nutritious milk. Mating is brief, but bucks usually tend a doe for two or three days afterwards, until she is no longer receptive to competing bucks. Bucks typically mate with multiple does.

Whitetail does give birth, usually to twins or triplets, in May or June, about six-and-a-half months after mating. Yearling does and sometimes even fawns can give birth, usually bearing just one offspring. Fawns are able to walk immediately after birth, but they are often left lying hidden in cover by the mother while she forages. Fawns have little scent to betray their location to predators and their reddish coat with white spots provides effective camouflage. This pattern blends well with dappled sunlight on a forest floor or in a dense thicket or meadow. If you encounter a fawn by itself, mom is nearby; it does not need rescue.

Fawns are weaned between eight and ten months after birth. Female fawns stay with their mother for another year or more in family groups of up to a dozen or so individuals. These usually consist of a maternal doe, her young of the year, and older daughters. Male fawns join small, loose, mixed-age bachelor groups after their first year. Whitetails can live up to 20 years but usually live much shorter lives, especially where heavily hunted. 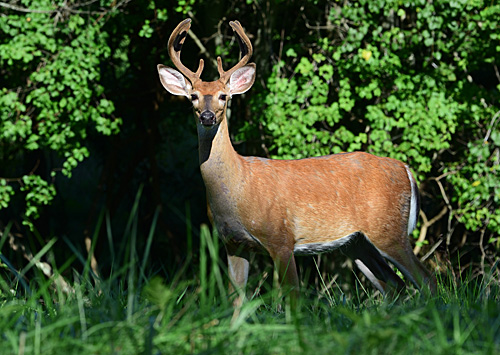 A buck glimpsed from Snickersville Turnpike.
Photo by Laura McGranahan

Primarily herbivores, whitetails eat about four to eight pounds of plants a day. Woody browse, including trees and shrubs, make up a large part of their diet, especially in winter. Fresh leafy growth on herbaceous plants is important forage in spring and summer. They consume large quantities of hard mast, such as acorns, beechnuts, and hickory nuts, and soft mast, such as blackberry, persimmon, and other fruits, from late summer through fall. Whitetails also feed on fungi and lichen, and at least one study documents them eating eggs and nestling birds. Contrary to popular belief, they eat very little grass.

White-tailed Deer are often described  as an edge species, meaning they do best in areas where different habitats meet, particularly forest and meadow or old fields. This allows them to move easily between habitats offering different resources — meadow and wood edge for fresh herbaceous growth in spring and summer and soft mast in late summer and fall; forest for cover throughout the year and for hard mast in autumn and woody browse in winter. Many suburban landscapes function for deer in a similar way, with an abundance of garden and landscaping plants providing a rich food supply, and parks and small woodlots offering cover. The suburbs are essentially all edge.

Ecologically, White-tailed Deer are considered a keystone species, one that has an outsized impact on the structure and function of an ecosystem. They are selective feeders, browsing more heavily on preferred plants, such as oaks and maples, over less palatable ones, such as American beech and spicebush. As a result, deer can have a strong influence over forest ecosystems, affecting the composition of plant communities. Whether this influence is beneficial or detrimental depends, at least in part, on deer population densities.

White-tailed Deer are tough survivors that have been able to come back from near extinction and thrive in an environment greatly altered by humans. In Part 2 in the next issue, we’ll look at the consequences of their success for forest ecosystems, humans, and for whitetails themselves. We’ll also consider how we can adapt to whitetails.