Sharing the Landscape With White-tailed Deer

In the last 50 years or so, White-tailed Deer have gone from scarce to abundant. This is undoubtedly a conservation success story, but do we now have too much of a good thing? Whitetails have adapted to human-dominated landscapes remarkably well, and their success often puts them into conflict with us over landscape and garden plantings, collisions with vehicles, spread of disease, and impairment of forest ecosystems. None of these conflicts is easy to resolve, and we just might need to do some adapting ourselves in a landscape we share with deer. 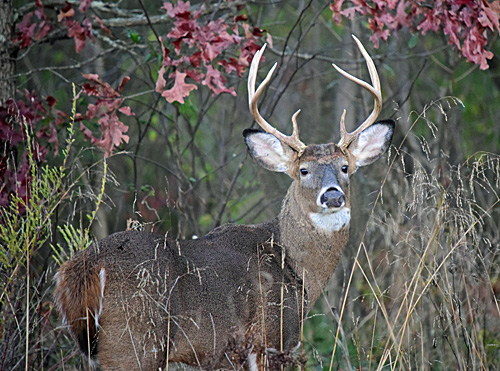 A Whitetail buck strikes a pose in a local yard before returning to the nearby woods.
Photo by Laura McGranaghan

People are often thrilled when they first see deer in their yard, but the thrill usually disappears along with the hostas and azaleas. Costs for damage to residential plantings by deer probably range into at least the tens of millions of dollars, though precise numbers are hard to find. Choosing deer-resistant plants, preferably natives, can help (see Julie Borneman’s article accompanying Part 1 for recommendations). Fencing, tree tubes and cages, and other physical barriers are the most certain way to keep deer from devouring plants, but these can be expensive and unsightly. Instructions for do-it-yourself barriers, using materials such as paracord or monofilament, are readily available on the internet. Avoid using plastic netting, though, as it can ensnare birds, snakes, and other small animals.

Deer repellent sprays, either commercial or homemade, provide short-term protection. However, these need to be re-applied frequently, especially after rain, and deer eventually tolerate them. Various scare devices employing electric shock, flashing lights, or sprinklers can provide some protection, at least until the deer get used to them. The Piedmont Master Gardeners has a good article that addresses physical barriers, sprays, and other measures, as does Plant Virginia Natives.

The Virginia Department of Transportation reports an average annual cost of deer-vehicle collisions at $533 million; the annual nationwide human death toll averages 200. States and communities can take measures to reduce collisions, such as signage, electronic roadside deer detection and warning systems, and wildlife over/underpasses. Still, drivers need to take responsibility. To reduce the chances of collision, obey the speed limit and be especially careful at dawn and dusk, when deer are most active. The fall rut, when bucks are pursuing does, is a particularly dangerous time.

Whitetails often move in groups, so if one crosses the road, more will likely follow. If a collision is imminent, don’t swerve to avoid the deer, as you could lose control of your vehicle. Just before impact, let your foot off the brake to reduce the chance of the deer going through the windshield. Finally, pay attention to deer crossing signs and be especially vigilant on those stretches of road. Research on devices attached to cars that supposedly repel deer with an ultrasonic whistle indicates that they are ineffective. 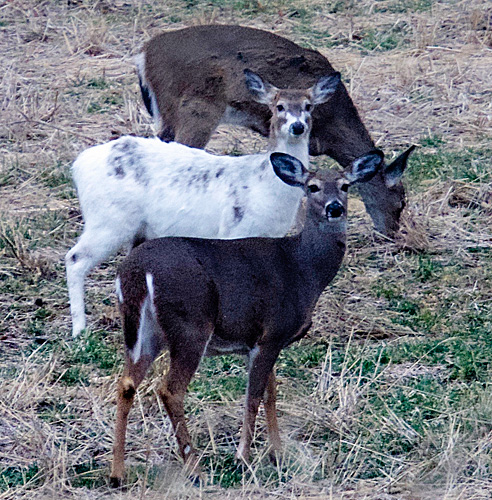 Three White-tailed does, including one with a piebald coat, are caught grazing in a field on a Round Hill farm.
Photo by Kathy Durand

Loudoun County, like many jurisdictions where residential development is expanding into previously rural landscapes, has seen an increase in the incidence of Lyme disease. Deer often get the blame, but their role in both the incidence of Lyme and tick abundance is uncertain. They are a host for adult Black-legged Ticks, which transmit the disease. Deer, however, do not carry the Borrelia burgdorferi bacteria that causes Lyme. Ticks get the bacteria in their larval and nymph stages from birds and small mammals, especially White-footed Mice. Research indicates a strong link between reduced small animal diversity and increased incidence of Lyme.

Lyme is a serious disease and just one of several carried by ticks, but focusing on deer is unlikely to reduce the incidence in humans. The best thing you can do is to protect yourself by wearing long-sleeves and long-pants in tick-prone areas and tucking the hems of your pants into your socks. Use insect repellent and check yourself thoroughly for ticks after being in tick-prone areas. The Centers for Disease Control website has guidance on how to remove and dispose of ticks.

In recent months, coronavirus has been detected in White-tailed Deer in Virginia and other states. This is an evolving story, but the virus has passed from humans to deer, though exactly how is unclear. More concerning, it has also passed back to humans, and deer have become a reservoir for the disease. Mutations of coronavirus within this reservoir have unknown implications for public health. Transmission from deer to humans is likely to be rare, but people who have regular, close contact with deer should be cautious. This situation will require ongoing monitoring by public health authorities.

Chronic Wasting Disease (CWD) has been found in whitetails in Loudoun County. Caused by proteins called prions, rather than a bacteria or virus, CWD affects the central nervous system. Deer initially appear asymptomatic, but eventually CWD causes loss of coordination, droopy head or ears, lack of fear of humans, excessive drooling, and extreme emaciation. CWD is always fatal, and there is no treatment. There is currently no evidence that CWD is transmissible to humans, but the Centers for Disease Control recommend not eating deer meat from symptomatic animals. Transmission of CWD appears to be enhanced by higher deer densities, so encouraging deer to congregate with feeding stations or salt licks can help spread the disease. The Virginia Department of Wildlife Resources (DWR) asks that people report deer showing symptoms of CWD to the Wildlife Conflict Line at 1-855-571-9003.

As early as the 1940s, Aldo Leopold and other wildlife professionals began warning about the ecological consequences of an unconstrained rebound of deer populations. A large body of research indicates that browsing by high-density deer populations has serious adverse effects on forest ecosystems. These include the loss of diversity and abundance of herbaceous plants and shrubs, alteration of plant communities, the loss of bird and other animal species dependent on those communities, spread of non-native invasive plants, and impaired forest succession and regeneration. Severely affected forests show a distinct browse line where much of the vegetation under 5 feet, about the height of a whitetail, has been consumed. 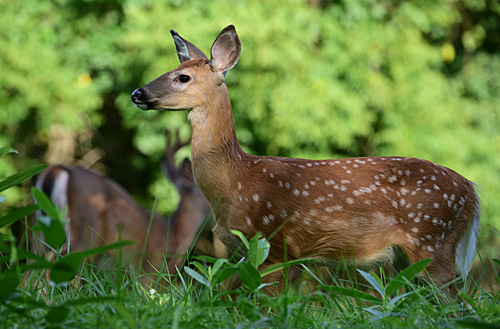 A fawn joins other members of her herd in the dappled light of a field near Snickersville Turnpike.
Photo by Laura McGranaghan

But is Bambi entirely to blame? More recent research into the history of deer populations and forest health suggest a more complex story. Pollen studies and other evidence shows that, prior to European colonization, substantial portions of the East were covered by open forests dominated by widely spaced, fire-resistant, shade-intolerant mature oaks and/or pines. Below the canopy was a very sparse mid-story and a dense, diverse herbaceous layer of wildflowers, grasses, and sedges.

This savanna-like open forest structure was maintained by frequent, low-intensity ground fires that allowed abundant sunlight to reach the forest floor and promote herbaceous growth. White-tailed Deer numbers were then likely similar to those today, and these forests had experienced millennia of herbivory without ill effects. Deer may have helped maintain the open structure and enhanced the diversity of the herbaceous layer by selectively browsing fast-growing woody species, especially shade-tolerant ones, that would otherwise outcompete herbaceous species for space and sunlight.

Fire exclusion efforts from the 1930s — placing a priority on completely preventing, as opposed to controlling, forest fires — resulted in closed forests with dense, woody plant growth that included more fire-sensitive species, such as Red Maple. The near elimination of whitetails probably added to the effects of fire exclusion by removing a major herbivore. The resulting high density of woody plants left little space or sunlight at the forest floor for herbaceous species. The result: denser, darker, moister forests and a decline of herbaceous plants and their associated animal species, such as Bobwhite Quail, Blue-winged Warbler, and Yellow-breasted Chat.

This is not to say that deer don’t cause considerable ecological harm at high deer population densities, at least in localized areas. Many problems in Eastern forests today, however, can be attributed to other causes, such as fire exclusion, forest fragmentation, other forestry practices, and climate change. Whitetails might actually be a valuable ally in efforts to restore open forests; we need much more research on the role of deer in forest ecology.

Our primary tool for managing deer populations is hunting, but hunters historically have wanted more deer, especially bucks, not fewer. Wildlife agencies in many states now encourage hunters to take more does through programs such as Quality Deer Management to reduce the population. Even if these programs are successful, however, the number of hunters is declining, putting the long-term effectiveness of hunting as a management strategy in doubt. Also, more communities and property owners  are restricting or banning hunting due to safety and other concerns.

Reintroducing Gray Wolves and other predators to the East is unlikely to be a politically viable option. Coyotes opportunistically take fawns, but not enough to reduce deer populations. Hired sharpshooters and police SWAT teams have been used  successfully to reduce deer numbers in individual communities and properties, such as parks. Deer sterilization and birth control efforts are expensive and have had limited success at best. Given the limited management options, White-tailed Deer will continue to be a significant presence on the landscape — one to which we will need to adapt.