May 16, 2022 Posted by Sheila Ferguson Birdathon, Wildlife News No Comments

Two to four inches of rain, depending on where you were in Loudoun on May 6 and 7, made for a very challenging Birdathon for Shrike Force (Joe Coleman, Mary Ann Good, and Laura and Liam McGranaghan). While the rain may have cut down on our comfort and visibility and limited where we were able to go, it didn’t stop the birds from appearing! Covering areas as diverse as Piney Swamp Road (where we found a pair of Trumpeter Swans) in the southwestern corner of the county to Algonkian Regional Park in the east (where we heard, thanks to Bryan Henson and Allison Gallo, the unearthly chorus of rare Eastern Spadefoot Toads), we found 117 species of birds, our highest count in our 17 years. 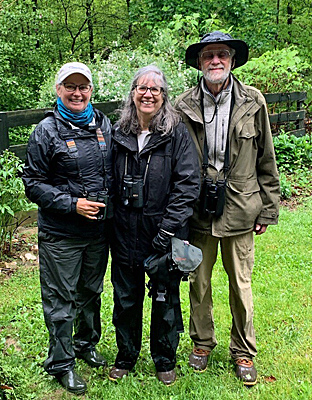 Shrike Force after 48 hours of birding.

After visiting Piney Swamp Road on Thursday afternoon, we stopped by the Bluemont area, near Joe’s home, and found a couple Bobolinks singing their wonderful bubbly song, several White-crowned Sparrows, and some shorebirds. We then moved on to the Dulles Wetlands, where we came across Loudoun Wildlife’s herpetologist, Jenny Erickson, conducting her surveys, and finding both peenting American Woodcocks and numerous Common Nighthawks hawking insects overhead in the evening sky. Because the incredibly loud frogs overwhelmed any bird songs and because Liam had to leave early Friday morning to lead walks for the West Virginia Wildflower Pilgrimage in Canaan Valley, we called it an early evening having found 75 species in little more than five hours.

When Laura, Mary Ann and Joe met at 5:45 am at Snickers Gap on Friday morning, we realized we wouldn’t be birding on the mountain ridge this year. The fog was so heavy it was hard to see each other in the parking lot, let alone any birds, so we moved on to one of our favorite spots, Appalachian Trail Road. Unfortunately, we also had to limit our birding there as the fog discouraged us from going any higher than the valley floor. We did spot a Barred Owl perched on the side of the road though. At the Blue Ridge Center for Environmental Stewardship, our next major stop, we didn’t spend as much time as we normally do because of heavy rain, but found several migrating warblers, a pair of Blue Grosbeaks and a Rose-breasted Grosbeak.  Before calling it quits due to the rain after visiting Bles Park and the Broadlands Wetlands, we stopped by the Meadowbrook Farm Pond in Leesburg and watched a Red-shouldered Hawk dive into about a foot of water to grab a large frog which it then dragged to the shore before flying off with it. We found a total of 82 species the second day of our effort. 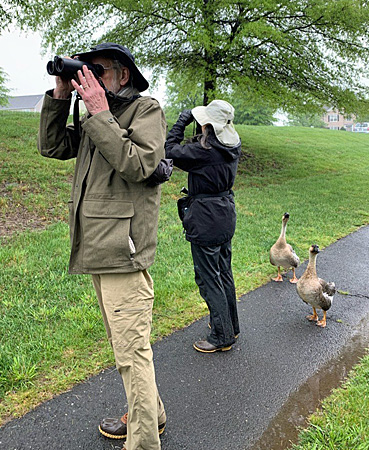 Two Egyptian Geese at the Middlessex Drive Pond wondering why they aren’t countable.

Starting in the rain at the Broad Run Stream Valley Park near Arcola on Saturday morning, we found some of the same birds that were there during the previous Saturday’s Celebrate Bird walk: a Hooded Merganser duckling diving in the pond, Grasshopper and Savannah Sparrows and another Yellow-breasted Chat. Unfortunately, much of the park was now inaccessible due to heavy flooding of the trail in numerous spots. After a brief stop at the Middlesex Drive Pond in Chantilly where we added the resident Mute Swan and others, we headed over to Algonkian Regional Park where we again ran into Jenny Erickson as well as Allison Gallo looking at the Eastern Spadefoot Toads that Bryan Henson had found earlier in the day. In spite of the heavy rain and flooding on the Potomac, Algonkian was a hotspot for warblers and numerous other birds including late Gadwall, convincing us that while it was a long way from our normal stomping grounds, it should be included on all of our future Loudoun County Birdathons.

It’s always fascinating to look back over what we’ve seen and compare it to other years. This year Ospreys were the most common raptor we found, with Bald Eagles a close third to usually much more common Red-shouldered Hawks, and Red-tailed Hawks trailing well behind. It’s also interesting to note what one has missed. Our most surprising omissions on this year’s count were Hairy Woodpeckers, Cooper’s and Broad-winged Hawks, both yellowlegs, and a few warbler species we find most years.

Because of the heavy rain, it’s a year we’ll never forget, but also because of the rain we visited spots we rarely do. So we were even more thoroughly convinced of the richness of Loudoun’s natural areas.

For a complete list of the species seen and the locations visited you can view the trip list at https://ebird.org/tripreport/52875.