They are beautiful, reflecting every color in the spectrum. A key part of the ecosystem, they serve as pollinators for many flowering plants. Unlike many other insects, butterflies are harmless to people because they don’t bite or sting. And most of all, they are inspirational, a muse to poets, artists, and scientists through the ages.

Sara Dykman took her love for butterflies further than most people would ever dream of doing. In Bicycling with Butterflies, we follow Dykman on her 10,200-mile solo bicycle trip along the migration route of the Monarch butterfly from central Mexico to southern Canada, then east to New England, and then back to her starting point. 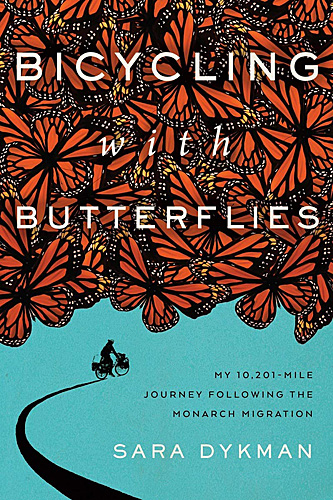 Dykman begins her trek west of Mexico City in the state of Michoacan at the El Rosario Sanctuary, the largest and most popular of the sites in the Monarch Butterfly Biosphere Reserve. There she finds hundreds of thousands (maybe millions) of Monarchs resting for their long trip north. When the Monarchs begin to migrate in the spring, so does Dykman, on a beat-up old mountain bike loaded with a tent and sleeping bag, a chair, a stove, two cook pots, some cold and rain gear, a few changes of clothes, necessary toiletries, a jug of water, a little food, and not much else.

Her plan was to average 40 miles a day, stopping wherever she was at the end of the day to find a place to camp, often behind a church or school. One of her goals was to talk to as many people as would listen about the plight of the Monarch. Promoting her trip on social media, she received invitations to speak at schools, garden clubs, and butterfly sanctuaries all along the way. At many of these stops, someone would inevitably invite her for a home-cooked meal, a shower, and an overnight stay in the guest room or the backyard.

One of the most important things we learn from this journey is that Monarchs are not in any danger of extinction. There are established non-migrating colonies of Monarchs in Hawaii, Australia, New Zealand, and along the Mediterranean (although how they got to any of these places is anyone’s guess except that humans almost surely had some role in it). What is at risk is the integrity of the migration corridor that brings the Monarchs to the eastern half of North America.

Though there are many reasons for this, the one principal factor that we can control is the loss of milkweeds along the migration route. As corn monoculture established itself in the Midwest, farmers set about eliminating natural milkweed patches. The milkweed was first mowed down and then killed with herbicides, destroying the habitat the Monarchs need to reproduce along the migration corridor. As Dykman explains, the only hope for the Monarchs of the eastern U.S. and Canada is replanting milkweed wherever we can.

I would never consider doing a nine-month bike trip, but I’m happy Dykman did and made it home safely,* and that she shared the experience with us in Bicycling with Butterflies.

*One of the most frequently asked questions of Dykman at her talks was whether her trip was unreasonably dangerous. While she downplays the dangers, anyone considering replicating this trip, or just flying to Mexico to see the Monarch wintering grounds, should consider that the U.S. State Department has recently issued a “Do Not Travel” advisory for Michoacan due to crime and kidnapping of tourists.