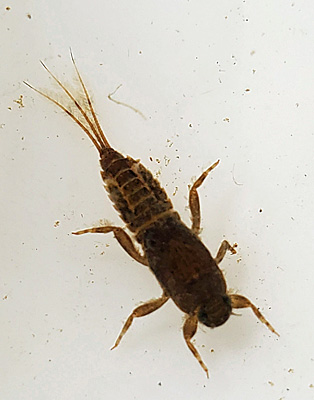 A Spiny Crawler Mayfly found in the North Fork of the Catoctin.
Photo by Amy Ulland

Blustery and overcast conditions didn’t deter Loudoun Wildlife’s Stream Team from conducting stream surveys at two sites on the North Fork of the Catoctin outside of Purcellville in late April. These sites, located above and below the future Route 287 and Route 9 roundabout construction project, are being monitored as part of a long-term study to investigate any effects of the construction on stream health. Certified monitor Amy Ulland led the surveys, assisted by certified monitor John Ellis and volunteers Susan Schuler and Janine Czarnecki.

The upstream site received a stream health score of 10 out of 12, indicating acceptable ecological conditions. Pollution-sensitive beetles and mayflies comprised over half of the 378 macros collected at the site. In addition to the usual Flatheaded and Brush-Legged Mayflies found in local streams, the team also identified some Spiny Crawler Mayflies. The Spiny Crawler Mayfly has a unique defensive posture in which it arches its tail up over its back, much like a scorpion, and uses its tail like a fencing sword!

The downstream site also received a stream health score of 10 out of 12, indicating acceptable ecological conditions. At this site, pollution-sensitive mayflies and pollution-tolerant midges comprised most of the 248 macros tallied. The Flatheaded, Brush-Legged and Spiny Crawler Mayflies were also all present here. 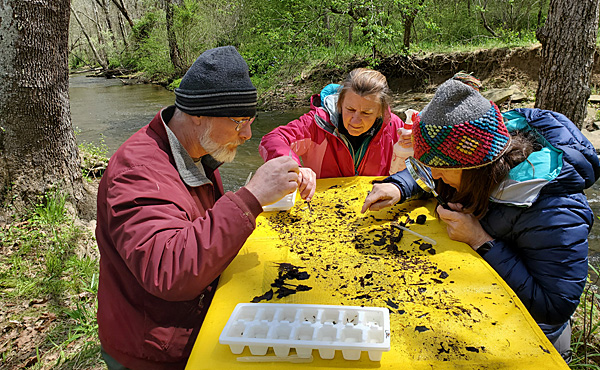 Stream Team members search for macros from the North Fork of the Catoctin.
Photo by Amy Ulland