Emerging ferns, Spring Beauties, and Trout Lily leaves dotting the forest floor along the banks of Sweet Run provided the perfect backdrop for Loudoun Wildlife’s Stream Team to conduct a survey of Sweet Run on a sunny afternoon in late April. Sweet Run, which is a tributary of Piney Run, meanders through the Blue Ridge Center for Environmental Stewardship property outside of Neersville. Certified monitor John Ellis led the survey, assisted by Amy Ulland and Emma Lloyd.

Over half of the benthic macroinvertebrates collected were mayflies – including some Spiny Crawler Mayflies and a type of armored mayfly, so named because of the large shield covering the thorax. The team identified 11 fishflies, which look very similar to hellgrammites, but lack the gill tufts in between the lateral filaments that project off their abdomens.

The team also found a single casemaker caddisfly, which uses silk and sand to construct a case (or “retreat”) around itself. This retreat protects the caddisfly from both predators and abrasions from particles flowing downstream. The caddisfly rebuilds this retreat if it is damaged and as it grows.

Sweet Run received a stream health score of 11 out 12, indicating acceptable ecological conditions. This score is consistent with the last two season of data collected at this site. 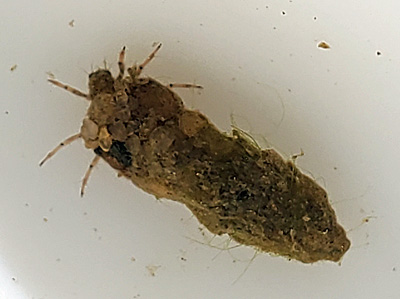 A type of casemaker caddisfly.
Photo by Amy Ulland 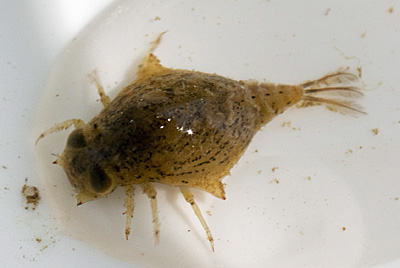