When you are walking near ponds and lakes, you may be fortunate enough to hear Green Frogs and American Bullfrogs. These two species of frogs are both common to our area, can share similar habitats, and are often confused with each other. 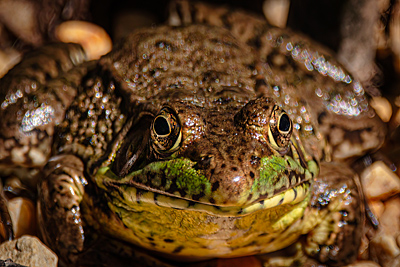 The Green Frog (Lithobates clamintans) can be found mainly in and immediately around water.  They are two to four inches in length and are variable in color from mainly green to only a small amount of green around the snout (and sometimes no green at all).  They are most recognized by their call, which is often described as a “plucked banjo string.”  They also are well known for making a squeak sound when they jump in the water after being startled.  Instead of completing metamorphosis in one season, many populations overwinter as tadpoles and complete their development the following year.

The American Bullfrog (Lithobates catesbeianus) is the largest frog in North America, growing to a length of six inches.  Like the Green Frog, they vary in color from a dull brown to bright green.  They are also well-known, voracious eaters and will eat almost anything they can catch and swallow including invertebrates, fish, frogs, snakes, small mammals and birds.  Though these large frogs are part of our natural landscape, they are considered an introduced and invasive species in the western United States and have been quite devastating to the native populations there due to their size, hardiness and gregarious feeding habits.  In our area, it in not uncommon for American Bullfrog tadpoles to continue to grow as tadpoles for two to three years before developing into an adult frog, with the tadpoles reaching lengths of four to six inches! 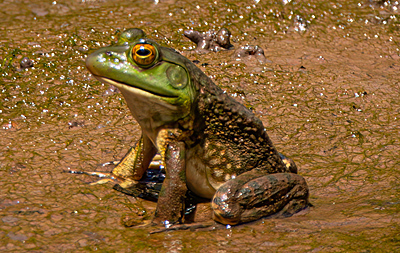 These two frogs can be confused with each other, especially the immature adults (they can be comparable in size during this time), but there are some relatively easy ways to distinguish between them. Green Frogs are known for having “dorsolateral ridges” (raised lines on the back or sides) that go from the eyes to two-thirds down the sides of the back.  American Bullfrogs have a ridge that wraps behind the “tympanum” (a circular patch of skin stretched over a ring of cartilage which transmits sound wave to the inner and middle ear and enables the frog to hear in the air and below water), but there are no dorsal ridges down the length of both sides of the back.  In addition, the Green Frog has a noticeably pointier snout, whereas the snout of an American Bullfrog has a broader and rounder snout.

Both of these frogs share similar habitats including ponds, lakes, marshes and swamps that have permanent water, and stream areas with more stationary water.  These areas are vital feeding areas and breeding grounds for the frogs.  They require permanent water because it provides a more constant supply of larger food sources and is necessary for the overwintering of the tadpoles.  These permanent bodies of water are susceptible to pollution from runoff, which can often include aquatic toxic chemicals found in pesticides and fertilizers.  Using more eco-friendly alternatives, planting native plants, and being aware of where runoff areas are located can immensely help the health of these permanent bodies of water.