76 Species of Birds Found on Walk at Algonkian Park 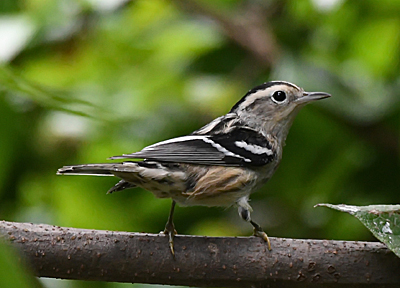 May 1st is always a great time to be outside looking for warblers, and Algonkian Park is a great place to look for them.  Led by Bryan Henson and Larry Meade, our group of 14 birders started off with a Black-throated Green Warbler constantly singing as we gathered together.  A Warbling Vireo’s song filled our hopes that today would lead to finding many more birds, and indeed it did.  Not long after, we found Orchard and Baltimore Orioles, a Indigo Bunting, a Black-and-white Warbler, an early Tennessee Warbler, singing Chestnut-sided Warblers, a Northern Parula and Blue-headed Vireos.  A lone Red-eyed Vireo provided a glimpse of the singer that will fill the woods with song during the summer.  Yellow-rumped Warblers were singing all around.  A Rose-breasted Grosbeak squeaked, and we were able to find her foraging in a tree nearby.  What a great start to a walk.  As we continued the walk, we picked up more and more common species like Blue-gray Gnatcatchers flitting about.

The walk followed the path along the river and we kept finding more and more birds.  One highlight was a Forster’s Tern flying down the river.  More Blue-headed Vireos, a couple of Ruby-throated Hummingbirds, Hooded Merganser, Common Merganser, Common Yellowthroat, American Redstart, and Palm Warblers added to the ever-growing list.  By the end of the walk, we had seen 76 species of birds including six species of sparrows, both species of local Orioles, and 10 species of warblers.  What a wonderful walk!