Rainbow Promises but Does Not Deliver at Blue Ridge Walk 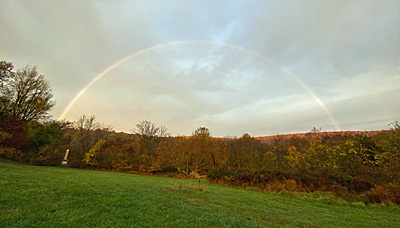 Six birders attended the October 2020 walk at the Blue Ridge Center for Environmental Studies on a misty Saturday morning. The walk was led by Michael Sciortino. We were greeted by a full rainbow at the start of the trip which gave us hope for a promising morning or birds. Perhaps we would find that pot of gold on the trail somewhere. The rain passed through early and was light in nature as we made our way into the tree canopy that provided adequate shelter. Temperatures were in the mid-60s but the sun never did appear during the walk. We were robbed of any colorful fall pictures.

Overall, the birding activity was pretty quiet but there were plenty of usual species that piqued the interest of the mostly novice birders. We recorded 23 species in total.

We took a quick peek at the Wortman pond area, and to our chagrin, it was devoid of any bird activity directly on the pond. There was quite a bit of other human activity at the center on that morning so any birds were likely scared off before we arrived. We got some good looks at Northern Flickers crossing the field and heard Eastern Bluebirds that we would eventually see on the way back through the meadow. The Farmstead Loop trail had decent activity with abundant Red-bellied and Downy Woodpeckers doing their work.

Along Piney Run the group had good looks (and sounds) of a Belted Kingfisher who was very vocal as it patrolled the stream. For some this sighting was their first look at a Kingfisher.

FSWe finished the day in the meadow which was active with Eastern Bluebirds, White-throated sparrows, and Northern Flickers. We did get some good views of flocks of Cedar Waxwings in the treetops with various batches arriving and departing. Overall, the day was heavy with woodpeckers.

For a complete list of our bird sightings please see our eBird record online at https://ebird.org/checklist/S75294582.