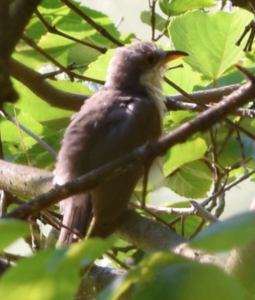 The eight participants in Saturday’s regular bird walk at the Blue Ridge Center for Environmental Stewardship on July 27 were delighted with a surprisingly dry and comfortable mid-summer morning and lots of bird activities.

While there were few observations of migrants, several Yellow-billed Cuckoos, Indigo Buntings, and Acadian Flycatchers were among the 45 species we found. Not only did we hear 10 Yellow-billed Cuckoos we saw at least three of them clearly. And several Indigo Buntings perch out in the open begging to be photographed as did some of the Acadian Flycatchers, a Yellow-breasted Chat and a few Cedar Waxwings. One group of Cedar Waxwing included a hatch-year bird. 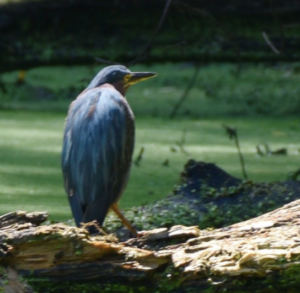 Co-leader Bryan Henson also identified several dragonflies and damselflies for us and saw a Worm-eating Warbler right before the walk began. While the group was unsuccessful in relocating it, we did see a Louisiana Waterthrush and three Green Herons, one a hatch-year bird in the same area.

In preparation for Loudoun Wildlife’s Annual Butterfly Count next Saturday we also practiced identifying the numerous butterflies we ran into at the Blue Ridge Center, one of the count’s many rich areas.

The complete list of birds observed can be seen at https://ebird.org/view/checklist/S58490822

Join us for one of the Loudoun Wildlife Conservancy regular bird walks every month.  The walk at the Blue Ridge Center takes place every fourth Saturday of the month; the walk at Banshee Reeks Nature Preserve happens every second Saturday.

For more information on the Blue Ridge Center see http://www.blueridgecenter.org.