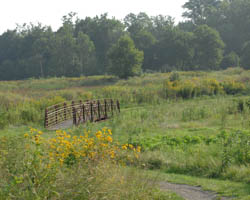 The first time I discovered Bles Park, I felt as though I’d stumbled upon a secret garden. It was late spring, early afternoon, between rains. I was escaping into the sunshine leaving the demands of my home office behind. A guilty pleasure.

Driving the short distance from my home in Leesburg, I made my way down Route 7 and entered the maze of streets that surrounds the Loudoun campus of George Washington University in Ashburn. I had never ventured into this neighborhood before. And Bles, being a new park, represented an exciting prospect. After all, I am in the business of collecting access points to the Potomac River, my favorite place to de-stress.

A green oasis tucked away in a suburban enclave, Bles Park consists of 124 acres. Yes, it offers soccer fields and a tot lot, but beyond this, Bles is blessed with 94 acres of “passive park” including wetlands and two major trails, the Potomac Heritage National Scenic Trail and the Broad Run Corridor Trail. On any given day, you might see people fishing, kayaking, hiking or chasing down dragonflies. 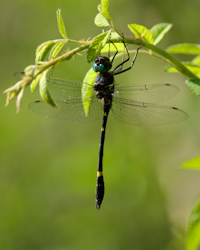 A few years ago, Andy Rabin, a computer programmer from Sterling, fell in love with dragonflies and damselflies. Now, working in conjunction with Loudoun Wildlife Conservancy, he takes small groups through protected places like Bles to study these delicate creatures. He claims to have seen over 50 species.

“There’s plenty of wildlife at Bles,” says Rabin. “Some of the interesting birds I’ve seen passing through are Red-shouldered Hawk, Virginia Rail, Bobolink, Prairie Warbler and Bald Eagles along the river. There are several species of frog and toad, and some turtles and snakes. I’ve also seen river otters a couple of times. One of the neatest things I’ve seen there—and only once—was a mink.”

According to Bruce McGranahan, Rust Nature Sanctuary Director and Greener Loudoun blogger, the wetland at Bles is considered a “marsh” because it is dominated by grasses, sedges and herbaceous plants. “The wetland there is fed primarily by surface water runoff from the upstream University Center development,” he says.

In the summer, the meadow becomes vibrant with colorful wildflowers. Along the banks of the river, you’ll see sycamore and silver maple trees. The east-west trail along the Potomac is well-defined, but “the banks of the Broad Run are overgrown and difficult to navigate,” says McGranahan. “However, it can be done by spirited hikers.”

Bles was turned over to the county by the developer because it is “undevelopable land,” says McGranahan, due to its location within the floodplain of the Potomac River.

The park is named after the original land owner, Marcus J. Bles. Loudoun County’s parks planner Mark Novak says the farmland where Bles Park is located was originally planned commercial, slated to be “another Crystal City.” But after the real estate bust of the 1980s, plans changed, and the land was converted to residential use. Out of this, the new University Center emerged. By 2001, the land had been rezoned, and the county set about preserving the waterfront property for recreation and wildlife.

“Our goal is to continue to work with the National Park Service to link the Potomac Heritage Trail all the way up to Harpers Ferry,” says Novak. “Bles is a natural corridor and plays host to a diverse population of migratory birds.” Novak says plans are also underway for interpretive signage and informational kiosks at the park.

For Rabin and others, Bles is a wonderland, a retreat from the hustle and bustle of everyday life, a chance to commune with nature. “Now, go slowly,” he instructs novice dragonfly hunters intent on netting a black-shouldered spinyleg or a spot-winger glider.  That’s good advice for any visit to Bles. Go slowly and savor every tranquil moment. I know I always do.

Bles is open seven days a week from dawn to dusk. Take the Presidential Drive entrance into University Center off of Route 7, turn right onto George Washington Boulevard, turn left onto Riverside Parkway and proceed to Bles Park.