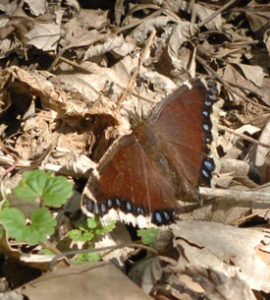 Imagine you’re taking a walk outside. It is late winter, and the first hints of spring are beginning to show through the freezing landscape. Melting sheets of ice crunch underneath your feet, as the crisp late-winter sun shines through the barren trees. Your eye catches movement, and you glance over to see the first butterfly of the season as it flits among the branches.

Wait … a butterfly, in March? It’s not a trick, or a random occurrence of nature — the butterfly you are seeing is none other than the Mourning Cloak (Nymphalis antiopa), one of the earliest butterflies of spring.

The Mourning Cloak butterfly derives its name from its coloration, which is reminiscent of the traditional cloak worn in mourning. Its 6–10 cm wingspan is a nondescript dark brown decorated with beige-lined edges and a speckling of distinct blue spots. The undersides of its wings are the same dark brown, with lighter brown edges.

Mourning Cloaks are members of the Nymphalidae family, also known as the Brush-footed Butterflies. This unique group of butterflies appears to only have four legs, instead of the characteristic six. In fact, their two front legs have evolved into stubby, almost brush-like limbs; hence the name “brush-footed”. Their significance is unknown, but they are one of the key identifying features of the Mourning Cloak.

The Mourning Cloak is one of the rare butterflies that weather the harsh winter cold in adult form, using a unique form of hibernation known as “cryo-preservation”. They are literally frozen inside shelters that they chose months before in order to mask them from predators. When the late winter sun reaches the frozen butterfly, it wakes from its slumber to greet the new spring.

However, upon awaking, its nearly 10-month adult life nears its end. Upon mating, these butterflies will, sadly, die. It seems rather inconvenient for the butterfly to endure the blistering cold for nearly 4 months, only to die shortly after waking; however, there is a reason for this unique life cycle.

The Mourning Cloak’s breakfast of choice consists mainly of tree sap, which flows readily during the early spring to wounds the tree sustained during the winter months. The caterpillars hatch after about 10 days, and will usually remain together on the same plant until around mid-June, when they reach full size. They travel away from their birthplace at last, in order to pupate. The butterfly will then emerge from the chrysalis after 10–15 days, depending on the temperature, to begin the cycle anew.

While not attracted to many flowers like other butterflies, Mourning Cloaks flock to willows, aspens, cottonwoods, and elms as host plants for their eggs. As for food, these butterflies will be found drinking sap from trees and the sugars from decaying fruit. A compost pile would be a good bet for attracting these unique insects, as well as other forms of wildlife. Keep your eyes open during the coming months, and you might just get a glimpse of the first butterfly of spring, the Mourning Cloak.