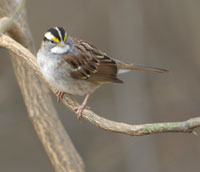 Report compiled and submitted by Joe Coleman, who does a fantastic job organizing and leading this event each year for us.

I’d like to thank all 125 of you for helping with the twelfth Central Loudoun CBC on Sunday, December 28. Without the 20 sector and subsector leaders this count would not be possible, and especially without those of you who consistently help with this and other counts every year; without your constancy this kind of massive citizen science effort would be impossible. 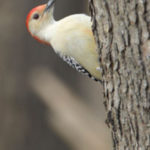 And thanks to all of the many counters, new and experienced, old and young, who come out and count every wild bird they find no matter how common or rare it is.

I’d also like to thank all of those who helped behind the scenes in a variety of ways including those who coordinated our Tally Rally, Rhonda Chocha, and those who helped with it this year, Karen Coleman, Bob & Sylvia Shuey, and Suzanne Payne.

All of you are the reason why Christmas Bird Counts are the world longest-running and most successful citizen science project.

The 28th, itself, was unseasonably warm with relatively strong southwesterly winds in the morning. While the count, itself, was pretty average with 90 bird species and 34,290 individuals observed, the 121 participants were 30 more than ever before and included a lot of new birders and several young people. About 50 of us wrapped up the day with a nice dinner at the Tally Rally at the ANS Rust Nature Sanctuary in Leesburg. 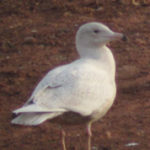 Our rarest find, a nicely-photographed GLAUCOUS GULL, occurred on Saturday when Bob Abrams visited the county landfill since it is closed on Sundays. This was especially nice as this count usually only ticks off two of the local gull species and even those are usually in low numbers when we can’t visit the landfill. The 2,709 RING-BILLED GULLS, counted on Sunday were not only our highest count ever, they were well-distributed in the more eastern portions of the circle and GREAT BLACK-BACKED GULLS have only been found on three of our other counts. And, surprisingly, the two DOUBLE-CRESTED CORMORANTS found on Sunday were our first ever.

As always some of the more exciting finds were count week birds. Besides the GLAUCOUS GULL, there were a dozen REDHEADS at the Beaverdam Reservoir, a SHORT-EARED OWL at Mountain View Elementary school near Purcellville, and an AMERICAN COOT (found on only four of the counts). 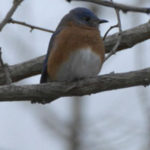 Other highlights of the count included:
– a LOGGERHEAD SHRIKE on the back side of Little River Farm along Rte 15, found in either this or a near-by location for each of the past four years
– 33 BALD EAGLES of which 19 were adults,
– a MERLIN between Mountville and Aldie, found on only four counts previously
– 7 PHOEBES, 4 more than ever before,
– 28 COMMON RAVENS, 8 more than ever before
– 2 CHIPPING SPARROWS, (found on about 1/2 of our counts)
It is interesting to note that both our Bald Eagle and Common Raven numbers have been steadily growing.

Owl observations were especially disappointing with the only highlight being two BARN OWLS found during the day. The actual nocturnal birding was especially poor, probably due to the poor weather conditions in the morning, with only three Screech Owls, two Great Horned Owls, and 18 Barred Owls found, our poorest showing in years. Also disappointing were the total lack of Red-breasted Nuthatches and, except for Yellow-rumps, any warblers. And while it is not surprising, it is certainly sad that not a single NORTHERN BOBWHITE or RUSTY BLACKBIRD were found.