Once an eaglet fledges and leaves the nest area for good, it starts its journey in the wild as a juvenile.  Unfortunately, there is a 50 to 60 percent mortality rate in the first year as the juvenile learns to become independent, find its own food, and face dangers never seen in the nest.  If the juvenile makes it through the first year, mortality rates drop significantly each year thereafter. 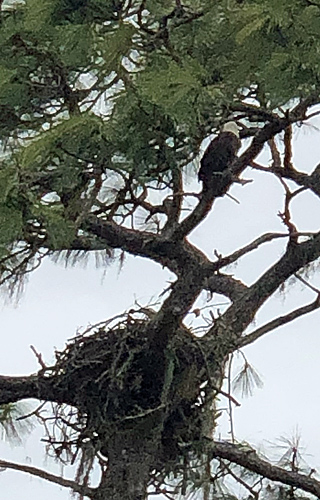 Eagles under human care can live for 30 to 50 years, but in the wild, the typical lifespan is 15 to 20 years. An eaglet faces some of the earliest mortality dangers in the nest, including congenital deformities, predation, starvation, failure to thrive and siblicide.  Congenital deformities may mean that the eaglet does not have the ability to hunt properly, which can lead to early death.  There have also been instances of predators taking and harming or killing an eaglet from the nest such as raccoons, Great Horned Owls, or other large raptors.  Failure to thrive happens when there isn’t a good food source, often affecting the youngest in a clutch, or even the older sibling killing the younger through aggression and competitiveness over food.  It has often been stated that the reason Bald Eagles lay multiple eggs in a clutch is to ensure that at least one eaglet survives to carry forward the species.

Poisoning is a real threat to eagles, and often comes through food sources such as rats and other rodents where homeowners/landowners have used pesticides.  Eagles can also be poisoned from lead that they ingest from carrion that is shot by hunters with a lead bullet and left.  Eagles all too often show up in rehab facilities with pellets and lead from being shot, not just ingesting the lead.  They can face electrocution going into power lines or damage from wind turbines and even strikes with airplanes.  Parasites are another danger to eagles in the wild and can lead to death as well as sickness.

Eagles face many diseases in the wild, a few of the more well-known ones being West Nile Virus, avian flu and pox viruses, the latter causing  blindness and major beak and talon deformities.  Accidents on, or to the side of, roadways are another mortality cause, especially in younger eagles who live on carrion until they learn to hunt at about age three.

Eagles are also injured or killed in territorial fights, especially as the numbers of  Bald Eagles has rebounded, and there is more density in nest areas with eagles migrating through, looking for nesting sites, and attempting to find mates.

Some of the more common enemies of Bald Eagles include humans, Great Horned Owls, other eagles and raptors, and raccoons and crows for Bald Eagle young and eggs.