May 17, 2022 Posted by Sheila Ferguson Birdathon, Wildlife News No Comments

The Larkolinks team started their Birdathon on May 9, birding the areas near the homes of the team members (Zoe Sowers, Debra Gutenson, Laureen Megan, Dolores Goodson, Nancy Noerpel and Sally Brenton). We were thrilled to see both Bobolinks and Eastern Meadowlarks, our namesake birds, early on our first walk. For many years the Bobolinks have migrated through, and we see them in the days before our Birdathon, but not during. Other highlights during the morning walk were both Baltimore and Orchard Orioles, Indigo Buntings and watching the Blue-Gray Gnatcatchers on their nest. One member spotted a Barred Owl, looking a bit disheveled after all the rain we had. Our morning walk yielded 55 species. 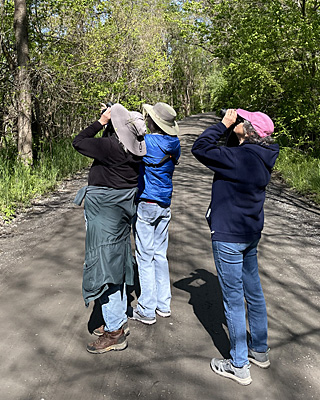 After a break for lunch, the team reassembled at Phillips Farm in Waterford. Unfortunately, the heavy rains over the weekend had washed away the bridge to the back part of the farm, so we had to content ourselves with the front of the property and a walk through town. It was fun to chat with some residents and give them the information on the Birdathon. Maybe they will donate or form a team next year! We were able to watch both European Starlings and Eastern Bluebirds take worms to their nestlings. We saw 36 species at the farm.

On May 10, we drove to the Blue Ridge Center and walked the Farmstead Loop. We saw lots of Indigo Buntings, but not as many as last year, where they seemed to be everywhere in the big field. The bluebird boxes were points of contention between the bluebirds and the Tree Swallows. Wonder who will win that fight? We were most excited about good sightings of Red-eyed Vireos – more commonly seen than heard – and also Yellow-throated Vireos. A total of 34 species were seen during this walk.

A short walk early on the 11th was rewarded with a Red-headed Woodpecker. It was our 72nd bird of the Birdathon, giving us a personal best count for the event.