When the Fearsome Fledglings signed up for this year’s Birdathon, we really weren’t sure what we were getting into. None of us had ever entered a Birdathon before, and aside from Sarah Kabealo (the handy chaperone, chauffeur and snack provider), the team’s average age was about six years old.  That said, with a lot of great advice from some experienced Birdathoners, all had a fantastic time! 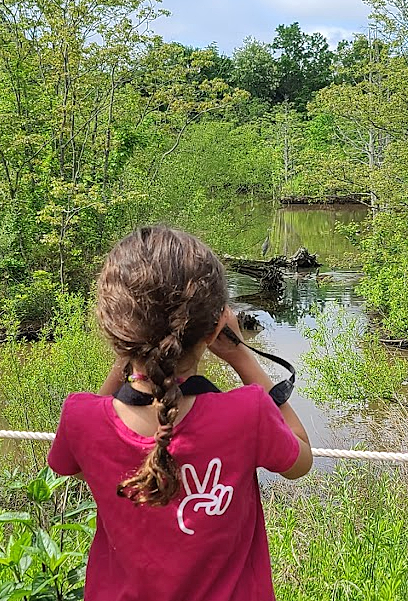 We started Saturday morning at our house, where we ate cinnamon rolls, watched the bird feeders through the window, and talked about birds. We looked through our field guides and discussed some of the ways we can tell different birds apart (size, color, behavior, habitat, calls), and listened to some sample bird calls. Then we started counting. Most of our usual feeder birds showed up, and we had a guest appearance by a Common Yellowthroat who came very close to the window and hopped around in the asters.

Once we were done with breakfast, we headed outside to explore the fields, wetland, and woods around our house. Highlights included a very cooperative Indigo Bunting that slowly posed for us in the driveway, an Eastern Phoebe nest in the barn, and the very noisy Red-Winged Blackbirds nesting in the cattails. We then came back inside to relax and draw some of the birds we had seen.

The next day, we headed over to Claude Moore Park in Sterling, which is a wonderful place for young birders. There are multiple ponds full of goslings, tadpoles, herons and turtles, as well as a great play area. A Wild Turkey came to visit us on the playground and then very quickly rethought her life choices, and at the end of our day, as we rested at the picnic tables, a Barred Owl very clearly called out from the woods, and the team yelled back “Who cooks for you!”

Sarah says she is so proud of the kids (Henry Kabealo, Eloise and Madeline Coddington, and Elle Koh) who spent a whole weekend learning about birds for a really great cause! Together, the team identified 39 species of birds and, so far, raised almost $600 to support Loudoun Wildlife Conservancy. Go, Fledglings! 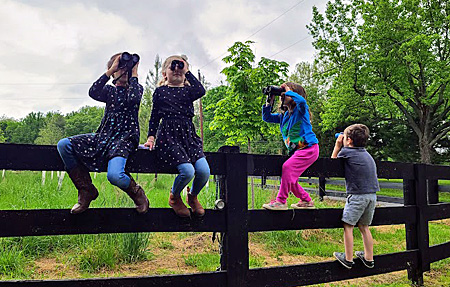