Loudoun Wildlife Conservancy’s new Introduction to Ornithology class took place over three sessions from September 15 to 29 and concluded with a field trip on October 9.  The class was taught by Gerco Hoogeweg and attended by 19 beginning birders who wanted to learn more about birds after observing and feeding them in their yards.

The first class covered the history of ornithology, what is being studied, bird biology, the ever-changing bird taxonomy and a year in the life of birds. Spring migration, territories, breeding, incubation, fall migration and winter irruptions were included. Information on various federal and citizen science programs such as breeding bird surveys and bird banding were also presented.

Bird identification techniques and the birds of Loudoun County were central to the second class.  LWC’s Birds of Loudoun: A Guide Based on the 2009-2014 Loudoun County Bird Atlas was used extensively to describe the birds found in our county. The science behind this work was discussed as well, showing participants that amateur ornithologists provide significant contributions to the field of ornithology.

In the third class, we covered the “tools of the trade.” Ornithology, once practiced with shotguns, has evolved into a field of science that relies on many tools such as field guides, radar, parabolic sound recorders, location trackers, trail cameras and advanced computer technology. Most importantly ornithologists and birders alike use binoculars. Binoculars, or “binos” for short, come in all size and shapes. In the class we addressed what to look for when buying binos, and how to use and care for them properly.

The final class session was a field trip for the students to practice their knowledge and skills in the field. We started promptly at 9:00 am at Algonkian Regional Park’s boat ramp. We quickly found a Great Blue Heron in the distance and a few Double-crested Cormorants on the river. In a nearby tree we heard a Downy Woodpecker and saw White-breasted Nuthatches. It was a bit of challenge to see all the birds as they flitted around the branches. Later in the walk, the participants were introduced to the concept of “warbler-neck.” We found a mixed flock of warblers high up in the tree canopy — not only making it a challenge to identify the birds but to aim your binoculars at awkward angles. We did see Ruby and Golden-crowned Kinglets, Magnolia Warblers and a couple of Northern Parulas. In the open fields near the rowboat launch, we saw a Bald Eagle flying over at high speed but at very low altitude. This was a magnificent sight. The sparrows we hoped to see never put in an appearance. We ended up seeing 37 species during the walk under pleasant weather conditions.  The complete list of birds seen during the trip is available at: https://birdersdiary.com/sr/7393131.html. 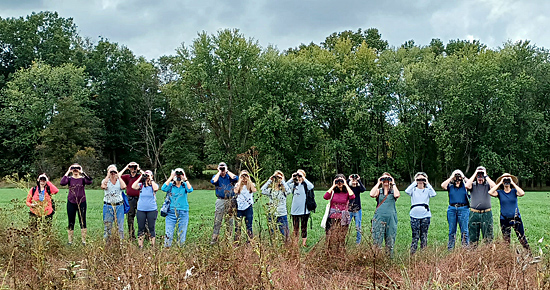