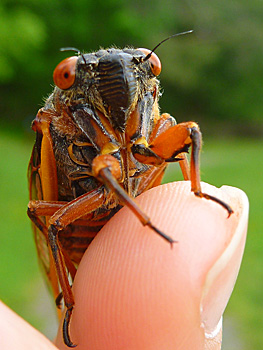 One summer afternoon in 2004, while leaving the Rust Nature Sanctuary outside Leesburg, I noticed white specks landing on my windshield. Those specks began to wiggle, and I realized they were newly hatched periodical cicada nymphs, drifting down from the overhanging oaks. I scooped up as many as I could and deposited them beneath the trees, where they worked their way into the soil. They will make their reappearance late this spring, along with billions of others across parts of 15 states, as periodical cicada Brood X (Ten) emerges.

Cicadas are members of the insect order Hemiptera , or true bugs, an order characterized by needle-like, piercing-sucking mouthparts. They differ in appearance and life cycle from the larger, greenish “dog day” or “annual” cicadas that appear every year from mid- to late summer. Fifteen broods or populations of periodical cicadas, each with its own emergence year, occur in deciduous forests of the eastern half of the United States. Brood X is one of the largest and most widespread. There are three species of 17-year cycle periodical cicadas and four 13-year cycle species, the latter occurring in the south. All three 17-year cycle species are represented in Brood X and include the Decim or Pharaoh Cicada (Magicicada septendecim), Decula Cicada (M. septendecula), and Cassini Cicada (M. cassini). They range around an inch in length, have black bodies, red, orange, or sometimes blue eyes, and orange wing veins and legs.

The hatchling cicada nymphs I encountered at Rust in 2004 dug down to the root zone of the oaks, where they tapped into the roots to feed on sap. Now they are about ready to complete their lifecycle. As the weather warms in late March or early April, the nymphs excavate emergence tunnels, leaving roughly half-inch holes at the surface. These are sometimes topped by chimney-like mud turrets.

The nymphs then settle back down a little below the surface and wait for ground temperatures to reach about 64 degrees Fahrenheit to emerge, which should be sometime between mid-May and mid-June. Emergence occurs around sunset and, with a little luck, you might be able to spot them crawling out of their exit tunnels.

The above-ground life of periodical cicadas is short but busy. After emerging, they crawl over the ground and a little way up a tree or other structure to molt into their pre-adult, or teneral, form. You’ll find masses of shed nymphal exoskeletons as evidence of this process. Over a period of four to six days, the teneral forms climb into the crowns of trees while their adult exoskeletons harden and they become sexually mature.

Now the main event starts. Male cicadas begin to call using drumhead-like tymbals on the sides of the base of their hollow, resonating abdomens. They gather in assembly choruses that first attract more males to create a sound beacon, which then attracts females. Chorusing cicadas can reach volumes of 100 to 120 decibels, about that of a chainsaw. Female cicadas fly to the sound beacon, land, identify a suitable partner, and signal their receptiveness to a male with wing flicks. The male responds with a series of soft courting calls, then mounts and copulates with her. 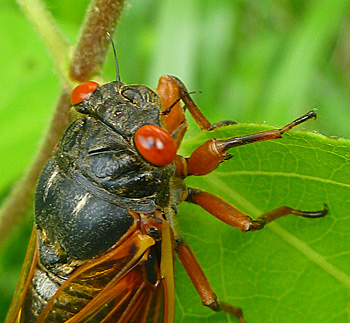 Mated females cut slits into pencil-thick hardwood tree twigs with their saw-like ovipositors (egg-laying organs), and lay about 10 of their 400 eggs in each slit. Adult cicadas die soon after mating, but we’ll see one last sign of their presence. The twigs bearing their eggs quickly turn brown and droop, a phenomenon called flagging. Large, mature trees aren’t adversely affected, but young, especially newly planted trees can be severely damaged or killed. In six to ten weeks, the cicada nymphs will hatch, drop to the ground, and dig down to the root zone.

Everything that can eat cicadas, from spiders to foxes and even some people, will partake of Brood X’s vast numbers. This predation, however, won’t have much impact. In a strategy called predator satiation, the massive, synchronized emergence of billions of periodical cicadas all at once far outstrips the ability of predators to consume more than a small fraction of them.

Only one pathogen, a fungus called Massospora cicadina, can disrupt their 17-year life cycle. It lies in the soil as dormant spores, infecting nymphs as they emerge. You can easily spot its victims, as they are often missing some or all of their abdomens, revealing white fungal spores inside. Infected cicadas can still fly and even attempt to engage in sexual behavior, spreading the fungus.

While you are out observing the emergence of Brood X, you can also contribute to cicada science through Cicada Safari (cicadasafari.org). The Cicada Safari app, downloadable from the Apple App Store or Google Play, enables users to contribute to research on periodical cicada distribution. The data generated will be used to construct more accurate maps of cicada broods. The app also contains lots of information on periodical cicadas. 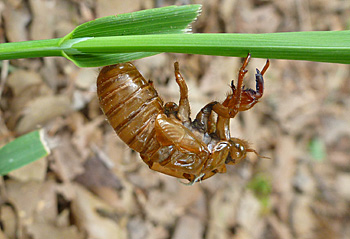 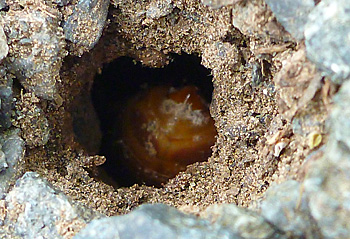 Nymphs excavate tunnels in late March or April but wait a few more weeks for warmer temperatures before emerging.
Photo by Emily Bzdyk