Migration is Under Way at Dulles Greenway Wetlands

Mary Ann Good and Mike Scott led five enthusiastic birders through the Dulles Greenway Wetlands on the morning of April 27.  Clear and calm, with temperatures making their way up from the 40s to the 70s, the team had numerous exciting encounters, tallying a count of 54 bird species. 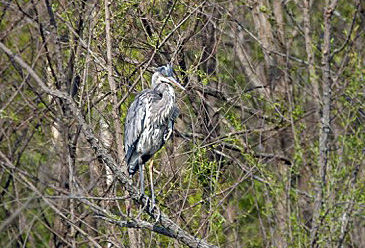 The group got off to a hot start, noting several very vocal Blue-gray Gnatcatchers and an Eastern Meadowlark by the parking area.  Later, we took turns on the scope, giving everyone a chance to view the juvenile Bald Eagle occasionally poking its head out from the top of its impressive nest.  While watching the eagle, five Great Egrets circled in from above, eventually landing in a tree nearby.  Red-winged Blackbirds, Tree Swallows, Swamp Sparrows and Blue Jays were all abundant and active in the marshy reeds.

As the group made their way closer to the Goose Creek, we got a handful of chances to observe four White-eyed Vireos singing energetically. A mother Wood Duck with four tiny ducklings quietly greeted us at the wetlands as an Osprey cruised overhead.  Two kingfishers were active on the creek, as well as a Northern Rough-winged Swallow and a Spotted Sandpiper teetering on a partially-submerged log. Nearby, a family of flying squirrels was seen sleeping in a tree cavity.

For a complete list of the birds observed at the Dulles Greenway Wetlands see the list below or view on eBird at https://ebird.org/checklist/S86487785. 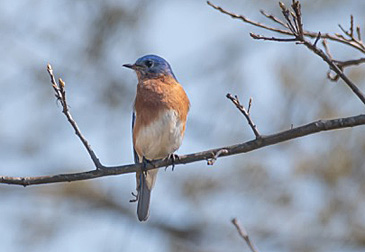