JK Black Oak Wildlife Sanctuary is not open to the public. Access is restricted to Loudoun Wildlife Conservancy activities.

We know about the rich vernal pool life with several obligate vernal species at JK Black Oak Wildlife Sanctuary, but when it comes to amphibians, birds, butterflies, dragonflies, mammals, and reptiles we know little. To learn more, several volunteers from Loudoun Wildlife Conservancy have been surveying JK Black Oak to document what wildlife is present. Having the opportunity to go out and survey a new place for wildlife is exciting!

Given its size, 87 acres, with several distinct habitats such as oak forest, meadows, and secondary succession forests, it should not be a surprise that JK Black Oak has a large variety of birds. During our visits we have documented over 115 bird species. 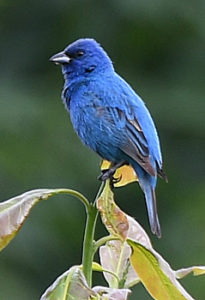 In the winter months when the vernal pools are full of water, Wood Ducks stop over and rest. In the spring, we found Spotted Sandpipers and Northern Waterthrush foraging in the vernal pools, and Rusty Blackbirds coming down for a drink. As part of research for the Virginia Breeding Bird Atlas, several bird species were confirmed breeding, including Pileated Woodpecker, Wild Turkey, Field Sparrow, Common Yellowthroat, Indigo Bunting and Wood Thrush. We know that Red-tailed Hawks and owls likely breed at JK Black Oak too, but this has not been confirmed. If there’s one bird that could be named the official bird of JK Black Oak, it would be the Gray Catbird. This gray bird with a cat’s meow can be found from April through early October in large numbers. During one survey we counted over 30 different birds, and we’re sure we missed a few.

In addition to birds, we have documented 35 species of butterflies, with most species found in the meadows. Monarchs, Eastern Tiger Swallowtails, Spicebush Swallowtails, and Eastern-tailed Blues are among the more common species found. In the forest area near one of the vernal pools Northern Pearly-Eye, Little Wood Satyr, and Hackberry Emperor took up residence. While you’re searching for butterflies, they may even land on you to enjoy the salt on your clothes. In middle to late September the goldenrods are full of American Snouts, Common Buckeyes, and several confusing skipper species. 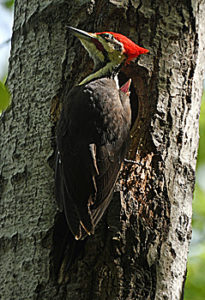 Indigo Buntings and Pileated Woodpeckers are among several bird species confirmed to live and breed at JK Black Oak. Photos by Gerco Hoogeweg

Dragonflies are also at home at JK Black Oak. So far, we have recorded nine different species with colorful-sounding names like Eastern Amberwing, Ruby Meadowhawk, Great Blue Skimmer, and Swamp Darner. Not surprisingly, most of them are present near water, but you can find Widow Skimmer and Common Whitetail easily in the meadows. More dragonfly species are undoubtedly present, though we have not yet documented them.

In August we had our first “herp” count for amphibians and reptiles. This event was attended by 16 volunteers who found several species at JK Black Oak, including the American Toad, Eastern Box Turtle, Ring-necked Snake, and Black Racer. Earlier in the year, using a webcam near one of the vernal pools, we recorded an Eastern Garter Snake. That was the sole snake species documented before the herp count. We found frogs, too, most notably the Spring Peeper. In one location we heard so many of them, it was deafening. Now we refer to that pool as Spring Peeper Pool.

Mammals at the property include the ever-present White-tailed Deer, Eastern Gray Squirrel, and during the recent Audubon-at-Home certification visit a coyote was seen. It is very exciting o have these shy predators roaming around.

We have learned a lot in the past year, but there is still much more to be discovered. Our survey data will help us guide restoration and conservation efforts to further enhance and improve the biodiversity at JK Black Oak Wildlife Sanctuary.