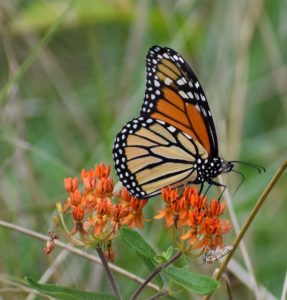 With some misgivings concerning the weather, eight teams of volunteers visited gardens, plant nurseries and natural habitats for the Loudoun Wildlife Conservancy’s 22nd annual butterfly count August 4. We counted an astounding number of Monarchs – 289 – more than triple the number seen last year! I like to think that gardeners’ willingness to plant milkweed and tolerate the damage done by the caterpillars has some bearing on this. The Monarch caterpillars you see now are of the generation that will head south to winter in Mexico or Florida. 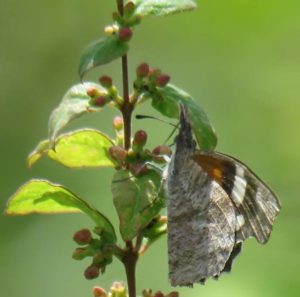 Another migrant we found is the goofy looking American Snout. It is not as large and showy as the renowned Monarch but its migration occasionally makes the news in Texas. We don’t see them in the count every year. I felt positively honored when one graced my shirt as I strolled along. The snout caterpillar feeds on hackberry (Celtis), a fairly common tree in Loudoun County.

Here are the species we saw and where we saw them. To read about past counts and see what species were noted each year click here.

The volunteers, many completely new to butterfly watching, did an outstanding job. We tallied 3,221 individual butterflies in 49 species. Thank you for your help!