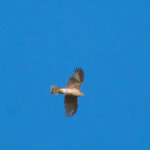 The highlights of the walk on Saturday, October 28, at the Blue Ridge Center were sparrows (8 species) and the beautiful early morning fall sun highlighting several raptors. The walk, on Butterfly Alley and the Sweet Run Loop, went through a lot of nice meadow habitat with lots of seeds. As a result there were numerous mixed flocks of sparrows and while we succeeded in identifying many of them, we were unable to identify many that quickly disappeared into the high grasses and scrub. We did great looks at a Lincoln’s Sparrow, a FOS (for most of us) Dark-eyed Junco, Swamp Sparrows, and numerous Song and White-throated Sparrows. The early morning sun also lit up two very vocal Red-shouldered Hawks who were flying together in the sky as well as a juvenile Sharp-shinned Hawk who flew right over a couple of people’s heads. Several flocks of Cedar Waxwings flew back and forth between trees with vines full of berries and grapes and also posed for us in the beautiful fall light.

We also saw a late Monarch.