Recently a visitor from out of town sat in my backyard as the sun went down and remarked that as dark descended around us, the chorus of frogs increased in volume. It reminded her of an orchestra reaching a crescendo. This frog symphony begins in March with the welcome sound of spring peepers and wood frogs, followed in later spring by American toads and other frogs. So much joyful noise in the evening! If you are lucky enough to live near a pond or slow-moving waterway you may also hear the distinctive rattling sound of the Eastern Cricket Frog joining the party. 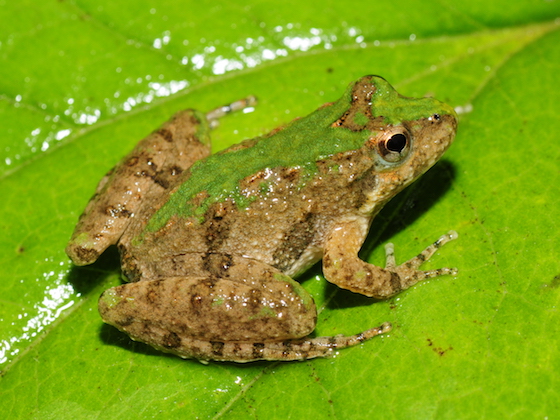 The Eastern or Northern Cricket Frog (Acris crepitans) is a small frog only reaching a size of 1 to 1½ inches. It has moist, warty skin and a dark triangular shape between the eyes as well as a stripe or Y-shaped median marking along its back. The shade of this marking varies and can be green, russet, brown, yellow or gray. The breeding season lasts into July, and the female lays eggs singly or in small groups on blades of grass or along the bottom of a shallow pond or slow moving stream. Tadpoles have a distinctive black tip on their tails and complete their metamorphosis by late summer. These frogs are not picky about their diet and are considered opportunistic predators, eating many kinds of insects. They prefer sunny banks and are often found on the grassy edges of ponds, wetlands and even ditches.

What sets Eastern Cricket Frogs apart is the unique sound of their calls. The species name crepitans comes from the Latin word “crepit” (rattle), and refers to the rattle-like sound they make. It can also be compared to the sound of two rocks being hit together, first slowly and increasing in speed for about 30 beats. A large population of cricket frogs can indeed sound like many rattles or raspy crickets.

So if you are fortunate enough to enjoy a summer evening near some wet and wild space in Loudoun County, listen for the unique calls of these little frogs amongst the chorus.