While mucking around in local streams as a child, I loved finding crayfish hiding under rocks in the water and bringing them home to observe in an aquarium. It was always rewarding to watch the “miniature lobsters” pick along the bottom, their many legs passing food particles to their mouth, the antennae constantly searching ahead for more food or friend or foe.

Crayfish (also called crawfish, crawdads, or mudbugs) belong to the phylum Arthropoda; they are crustaceans like crabs and lobsters. Like their cousins the insects, Arthropods are characterized by jointed appendages on a segmented body, which is protected by a hard exoskeleton. Their skin cannot grow with them, so they must periodically molt. A crayfish has two main body sections: the cephalothorax and abdomen. They breathe through filamentous gills located inside the body at the base of their legs. They possess a pair of enlarged claws at the front of their body and 4 pairs of walking legs with small claws at the end of each. There are numerous feeding appendages around the mouth at the front of the body. They have a pair of compound eyes on the end of short stalks, a pair of antennae and a pair of antennules (smaller antennae).

Depending on the species, crayfish can be found in ponds, streams, rivers, marshes, and even drainage ditches. Some crayfish shelter under rocks while others burrow into mud near a body of water – sometimes forming distinctive mud “chimneys”. When crayfish reproduce, the female carries the 100-500 eggs in her swimmerets, a set of short legs under her tail. She is said to be “in berry.” The young crayfish will also ride on her for up to a week before dispersing. Crayfish are mainly scavengers, feeding on decaying plant and animal material. They also will prey on invertebrates such as aquatic insect larvae and worms, but seldom catch fish. They are preyed upon by at least 240 species of animals, including large fish, raccoons and birds such as herons. Crayfish are a vital element in a healthy ecosystem. 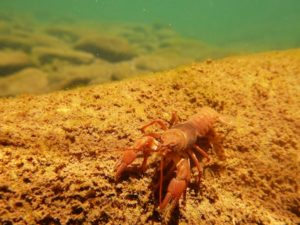 There are 34 native species of crayfish in Virginia, as well as several non-native species. One such non-native is the Rusty Crayfish (Orconectes rusticus), which is native to the Ohio River valley. It has distinctive large claws and rusty colored spots on the sides of its carapace. The Virile Crayfish (Orconectes virilis) is another non-native. They were likely spread by human activity, as crayfish are used as bait by fishermen and also used in biological research and the pet industry. These non-natives are large and aggressively outcompete our native species. In Virginia, the Big Sandy Crayfish (Cambarus veteranus), is listed as endangered and 13 other species are listed as “Species of Greatest Conservation Need.” To help stop the spread of non-natives, never purchase crayfish as bait or pets. If using them for fishing, only take as many as you will use and never release them into any body of water.