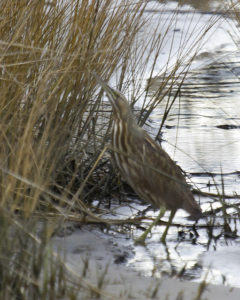 Reclusive and highly skilled in the art of camouflage, it is a true gift to see an American Bittern (Botaurus lentiginosus) while out walking the marshes of Loudoun County. A member of the heron family, the bittern is a bird of medium, stocky build with an impressive length of between 23-34 inches for both males and females. Despite this substantial size, their marked brown and buff vertical striping along the neck and their characteristic stance – bill tilted to the sky, weaving among the reeds – enables them to virtually disappear into their marshy surroundings.

They are also not typically social, preferring a mostly solitary existence. As if it weren’t difficult enough to find an American Bittern due to its excellent camouflage, locating a single individual out among the marshes proves to be an even greater challenge. An exception to this rule is during mating season, migration or territorial battles between males, when numbers might make a sighting more likely. If you are lucky enough to witness a standoff between males, you are in for quite a display. The scuffle typically begins on the ground, but often escalates skyward, each bird asserting his dominance by using his bill as a weapon while in flight.

Relations between males and females are brief at best. The male attracts the female with his characteristic “booming” call, lowering his neck and ruffling his seldom-seen white neck feathers. Females build their nests around freshwater marshland from a variety of materials including cattails, sedges and other grasses. Females raise 3-7 young independently of the male.

Bitterns feed throughout the day, but primarily during times when lighting is softer such as dusk and dawn. They will consume just about anything found in the marshy wetlands, including bugs, small mammals and rodents, crustaceans and fish. They have unlimited patience, standing stock-still, swaying their horizontal bill with the breeze until the right moment presents itself.

We are lucky in Loudoun County to host bitterns year-round, as this is one of the only areas in the country where brackish marshes do not freeze during winter. While this may make it even more surprising we do not see bitterns more often, their stealth-like movements and ability to blend into surroundings make them almost invisible.

One of the best ways to locate a bittern is to become familiar with its unique call. With nicknames like “water-belcher,” “thunder-pumper,” and “mire drum,” it is no surprise the bittern’s call is quite distinctive. Sounding more like a loud gulping, the inexperienced ear might mistake it for a member of the marsh’s frog “chorus” rather than a bird. However, if you familiarize yourself with the call, you will be able to more effectively locate one among the reeds. The use of binoculars, a spotting scope and a lot of determination and patience are key when looking for this spectacular but seldom seen bird.