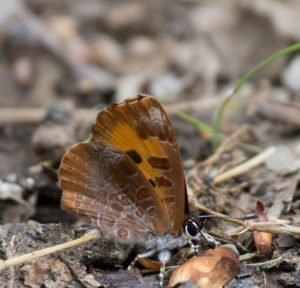 Butterflies are often the favorites of the insect world. Adults flit about, pollinating, sipping sweet nectar from flowers and dazzling us with their beautifully patterned wings and their caterpillars are peaceful leaf-eaters … usually. There is one caterpillar in our midst that has a very different diet. The caterpillar of the Harvester butterfly, Feniseca tarquinius, is unique among all the eastern North American butterfly species – it is strictly carnivorous!

The adult female butterfly lays her pale green eggs in a colony of woolly aphids, or occasionally scale insects or tree hoppers. The tiny first instar caterpillars that hatch from the eggs are very small and may use silk threads to restrain their aphid prey in order to feed. The caterpillars are often found in groups, feeding on the same aphid colony together. They are slug-like and small, reaching a total length of just under 2 cm. They have a bright white, gray and yellow pattern and are covered in bristles.

To protect themselves from predation by ants, which tend the aphid colonies, caterpillars have adapted several strategies. Some construct a net that covers them as they consume the aphids, the surface of which is littered with the carcasses of their prey. In other instances they attach dead aphids directly to their own bodies. Sometimes the bristles on the caterpillar’s back become covered with the leftover waxy filaments (the “wool”) produced by the woolly aphids they are eating. The caterpillar’s bristles may even share some of the molecular structure of the woolly aphids. Sometimes, the ants tending the aphids are even tricked into tending and protecting the caterpillars.

By feeding on aphids, the caterpillar gets more concentrated nutrients and develops faster than other butterfly species. It takes only four instars (normally, caterpillars go through five) and a little over a week to complete the larval stage. Once the caterpillar is finished feeding, it finds a secure location on a nearby twig to form a chrysalis and overwinter in this stage. This pupae is said to look like a monkey or lizard face.

In the spring, the adult emerges. The dorsal wing surface is orange surrounded by a dark brown/black border. The ventral side, which you see when the butterfly has its wings closed, is a light reddish brown with darker brown spots outlined in white. The adults stay close to the caterpillar’s food source, so they exist in small extremely localized populations. The male perches and waits for females to fly by, then chases them to mate. Adults do not feed on floral nectar; they have a short proboscis which they use to sip aphid honeydew, mud, dung or sap. Because of their distribution, they are not commonly observed. But if you live in a wooded area, especially near water, and you find that a colony of woolly aphids have descended on your favorite shrubs, perhaps you may be visited by this exceptional butterfly!

The Harvester- America’s only Carnivorous Butterfly