The Spring of Birdsong 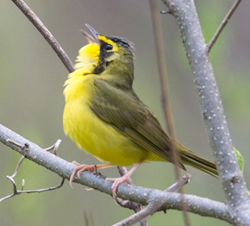 For birds, the Winter Solstice is the First Day of Spring. How can that be? Well, listen! That’s right, go outside and listen to the birds. Very few people have noticed that the birds wintering in our area start to sing on, or shortly after, the winter solstice. Apparently, the lengthening days are a cue to these birds that it will soon be time to select and defend a territory, and this requires that the males sing. It wasn’t until I read the words of my good friend Don Kroodsma, clearly stating his appreciation of this phenomenon, that I really noticed what was happening.

In our area, the Carolina Chickadee, Tufted Titmouse, White-breasted Nuthatch, Downy and Hairy Woodpecker, American Robin, and Carolina Wren are among those that exhibit this post-solstice singing, even though they will not be nesting for months. Within these nonmigratory populations it must be important to keep up one’s social status. The higher your status, the better nesting sites you can defend. Also, more females will want to be your partner. So, the males start their vocal athletics early and keep it up right through spring and early summer.

You have to listen for songs and not calls. Calls are given year-round and function within the social context of the lives of these birds. Flock contact and organization calls, predator alarms, and food calls, all fall into the category of calls. Songs are special, used by the males to defend a territory, attract a mate, and to interact with neighboring males. The song of the Carolina Chickadee is feebee-fee-bay and not the chick-a-dee-dee-dee calls. The song of the Tufted Titmouse is Peter-Peter-Peter-Peter! American Robins of course carol a bright cheerily-cheeriup-cheerily. The woodpeckers “sing” by drumming, slamming their bills into a branch, small limb, or unfortunately at times, an aluminum downspout or tin roof.

As winter gives way to spring, woodlands, fields and thickets seemingly explode with the songs of birds. From the relative quiet of winter, the presence of all these songs is a haven for the soul. At the beginning of each day the dawn chorus unfolds, an exuberant announcement that each male has survived the night – singing to let his mate and his neighbors know that he is still there and defending his territory. As the sun rises, this dawn chorus spreads ever farther west, like a tidal wave of song ushering in the new day. At any time of year there is a dawn chorus happening somewhere on the planet. Either in the Northern Hemisphere or the Southern, there is always a dawn chorus rushing westward before the sun.

Think, every morning when the sun peeps through

The dim, leaf-latticed windows of the grove,

How jubilant the happy birds renew

Their old, melodious madrigals of love!

And when you think of this, remember too

‘T is always morning somewhere, and above

The awakening continents; from shore to shore,

Somewhere the birds are singing evermore.

So why make all this sound? It seems these singers would be drawing undue attention to themselves from predators. While chemical signals are stealthy, they are subject to the wind and cannot travel very far. A visual display would really expose the signaler to predation. However, producing a sound allows the singer to either remain hidden or to be exposed, and the song will radiate out in all directions. Different environments require the singer to produce different types of sounds. Low pitched, long notes travel better in dense vegetation (Hermit Thrush, Canada Warbler, Northern Waterthrush). High pitched, short notes can be heard farther in open habitats (Savannah Sparrow, Bobolink, Grasshopper Sparrow). In order to be heard, different species have evolved different singing strategies for the habitats in which they live. 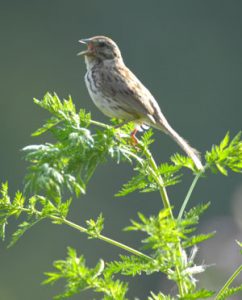 Some songbirds learn the sounds that they produce from adults of the same species. These “learners” have an innate pattern of what the song should sound like, but they must learn the fine structure of the song by listening to adults singing and then how to produce those notes through a great deal of practice. Young songbirds babble just as human babies do. At some point they start to produce notes that sound very adultlike, just as a human baby will start to say a word or two. Then the young birds will start to string these well-formed notes into song elements, just like short sentences. Then they stop practicing out loud and fall silent for the winter months. As spring arrives they resume practicing. A young male will compare what he is singing with the templates memorized from the males he heard the summer before. Soon, he will be singing adult songs and establishing his own territory in the area where he was listening to other singing adult males that first summer. Our beloved Song Sparrow is a perfect example of a learner. Listen in late February for the first tenuous notes of last year’s young males – the notes quaver and often run on in longer strains than a typical Song Sparrow song. These sounds are nothing like the beautiful songs of the adult male Song Sparrows that begin singing as winter recedes. By early March our young Song Sparrow is singing notes that sound very Song Sparrow-like, though the tempo and pattern isn’t quite there yet. By late March our young male is now singing songs that are the proper length, structure, tempo and rate of delivery. Now he can start to establish and defend a territory and hopefully attract a mate to the patch of habitat he now calls home.

Other species of birds do not learn their songs from adults. Their songs are somehow encoded within their DNA, and they have a genetic predisposition to produce the songs of their species. If you were to take a very young, just hatched male of one of these species from its nest and raise it in isolation, it would eventually sing a very good rendition of that species’ song. This has been done with Eastern Phoebes; these isolated males will sing the typical phoebe song even though they have never heard an adult sing while growing up.

Birdsong has had a tremendous impact on humans over the centuries. Thousands of poems have been written about the wondrous songs that some species sing. The notes and songs of birds have inspired many musical compositions. Many of us find solace while sitting quietly, in a tranquil place, surrounded by birdsong. I could not have expressed that feeling better myself than this by my dear friend Lang Elliott:

Be assured that a world of heightened appreciation awaits you if you go outdoors and embrace the music of the birds. But beware! You may end up like me, waiting impatiently for the snow and ice to melt, listening quietly for the first cheerful notes, and finally celebrating with joy those glorious days when spring has arrived and the birds are in full song.