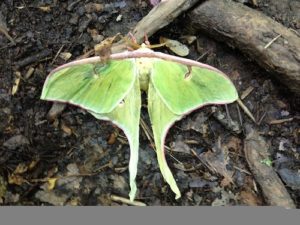 My love affair with the Great Saturniid Moths, or Giant Silkmoths, began 15 years ago when I discovered my first live Luna Moth. Weak and hardly moving but still whole and beautiful, the Luna had just been discovered by a group of ants. Realizing that it probably only had a few hours left in its very short life, I carried the moth inside and laid it among some flowers I had arranged on my kitchen table. I would like to think that it spent its last hours in relative comfort, while at the same time giving me a chance to sketch it and paint its Elysian colors.

Several years later, my passion for this family of moths really took off when I discovered John Cody’s book, Wings of Paradise: The Great Saturniid Moths, which includes 72 of his watercolors along with commentary on the moths’ life cycles, habitats and geographical range. Known as the “Audubon of moths,” John Cody is world renowned for his exquisite and detailed portraits of the Great Saturniid Moths and their associated plants. In 2007 and again in 2008, I was fortunate to take painting classes with Dr. Cody, who inspired me not only to capture these gorgeous creatures in artworks but also to learn more about these endangered giants. 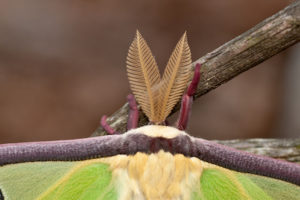 The Saturniids are the largest and most spectacular of our moths. Adults are brightly colored with beautiful markings, many with prominent eyespots, and the largest can have a wingspan up to 6 inches. They are soft and furry with a velvety appearance, with wings like colorful woven carpets, tufted legs attached to soft furry bodies, and feathery antennae. Some admirers call them the teddy bears of the insect world. Sadly, the adults only live for a few days, no longer than a week.  Having no mouths and no functioning digestive systems, they do not eat or drink and survive only on energy stored when they were caterpillars. After emergence from their cocoons, the male’s only goal is to find a female and mate with her, and the female’s only goal is to find an appropriate host plant on which to lay her eggs. Finding host plants is critical, as these must provide appropriate nutrition for the caterpillars to survive. The female makes the selection by smell, flying from plant to plant and laying eggs, usually in clusters, only on suitable host plants. Depending on the species and temperatures, the eggs normally hatch in a week or two. Both parents die several days before the eggs hatch, so the tiny, orphan caterpillars are on their own.

The larvae chew their way out of the eggshells, and their only mission is to eat and grow. Most Saturniid caterpillars feed on the leaves of trees and shrubs. None bore into the plants’ stems, wood or fruits, and almost none feed on grasses or herbs. Having an external skeleton, they must stop feeding periodically to molt. Molting usually happens four to six times before a caterpillar is full-grown. The diversity of color and ornamentation of the Saturniid caterpillars is amazing. Some are smooth and green, some mimic seedpods or dead leaves, and others are brightly colored and covered from head to tail with spines. Each species’ appearance has a purpose: some use mimicry and camouflage to conceal themselves, while others are adorned in gaudy colors to warn predators away because they are poisonous.

Most of the Saturniidae in eastern North America spend the winter in the pupal stage in thick, silken cocoons.* These are often attached to a twig, woven among leaves, or affixed flat against a tree trunk or rock, although some winter on the ground among dead leaves. The subfamily Citheroniinae, or Royal Moths, are unique in that they pupate in a cell buried in the soil. The emergence of the moths from the pupae or cocoons is triggered by external stimuli — longer days or warmer temperatures in spring, or shorter days and cooler temperatures in autumn. When the adult moth emerges, it hangs stationary until its soft shriveled wings can be expanded to full size. Then a hardening agent is released, and the wings become frozen into their final shape. Immediately the search for a mate begins. Males search for females solely by scent and may come from miles away. Many males may approach a female, but she will mate with just one. After mating, a male will seek other females, but the fertilized female will search only for a host plant for her eggs. And so, the cycle begins again…

To me the most gorgeous and spectacular of the adult Saturniidae found in Loudoun County are members of the subfamily Saturniinae, especially the Polyphemus, Luna, Promethea, and Cecropia Moths. Because these moths are mainly nocturnal, many people do not have the opportunity to see them alive. However, if you are lucky, you may see one during the day at rest on a plant in your garden or even on your screen door. If you can get close enough, take a big sniff. Like all members of their genus, the moths smell like fresh peanut butter.

All of these moths were once abundant in our area but have become rare. Tragically, this is happening with the big moths on a global scale, especially in the tropics where most moths fly. The reasons for the decline are unknown, but it is suspected that light pollution, parasitoids, environmental degradation, deforestation and pesticides may be the causes. In the U.S., many native species suffer from parasitism by a tachinid fly that was introduced to control the Gypsy Moth. Cecropia caterpillars seem to be particularly hit hard by this invasive predator. What a terrible loss it would be to have these magnificent creatures with their unique beauty disappear from our landscape. In our area, we can help by gardening with native plants, not using pesticides, leaving natural areas unmowed, and turning off outdoor lights at night. As John Cody writes in his Wings of Paradise:

The question of what moths are good for is a frequent one. Perhaps one should ask what flowers are good for. The two questions are comparable. The adult moth is the efflorescence of the species’ life cycle. Their maximum span of life is a week. During that time they fulfill nature’s purpose to perpetuate itself. That’s what they are good for …  Along with all the other oppressed and crowded-out examples of nature’s craftsmanship, the Saturniid, by its beauty, has the capacity to bring joy to members of all future human generations … Therefore, to the question “Who needs it?” I respond for those yet-to-be-born children and adults.  I answer, pleadingly, “We need it.”