As highly prized as the bright blue of the sky and one of the most sought after and difficult to find warblers, the Cerulean (or “sky blue”) Warbler might be found high in a tall tree such as a White Oak. This elusive, azure-colored songbird is uncommon over most of its breeding range and spends the majority of its time high in the forest canopy making it notoriously difficult to see. Never common in our area, Cerulean numbers have declined 82% from 1966 to 2008, faster than any other migratory warbler in eastern North America. Because of their rapidly declining numbers, they are of growing conservation and management concern. Although they are more easily encountered in parts of neighboring West Virginia, residents of Loudoun County are lucky to find this prized bird in a few nearby strongholds.

The voice of the Cerulean Warbler (Dendroica cerulea) may be heard on spring or early summer walks at the Blue Ridge Center for Environmental Stewardship where they regularly nest. The male calls to his mate or a rival male with a rising, buzz-like trill, “zray zray zray ze-ze-ze tzeeeee.” The pair builds a cup-shaped nest far out on a limb of a mid-story or canopy tree in mature forest with open, sparse understory, often near an opening in the canopy. They prefer to nest and feed high in large tracts of deciduous trees that include white oak, sycamore, maples, black locust, and elm, gleaning the undersides of leaves for insects and caterpillars and occasionally darting out to catch insects on the wing. The female weaves a nest of bark and plant fibers and hair that she binds with spider web and decorates with lichens and moss. If the first nest fails, she may use spider web from the old nest to construct the new nest, adding fresh lining, as spider web may be too precious and time-consuming to waste. 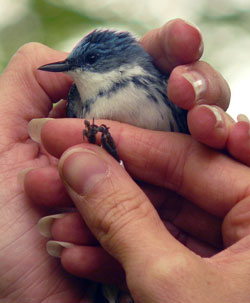 The male Cerulean has a blue head and back, extending in a necklace around its throat and streaking down each side. It has two white wingbars, a white throat and belly. The pretty blue-green female lacks the necklace and has a yellowish wash on the belly. Ceruleans are a diminutive 4 inches in length and weigh about 8 grams, or about as much as two nickels. The male may actively help the female choose a nest site while “whisper” singing (singing very softly) and closely following her. The female has a delightful habit of sitting where she might build a nest and spinning around, almost as though she is checking out the view before she builds. When females are incubating eggs, males often watch over the nest while the female leaves to forage. The female displays a nest defense sometimes referred to as “bungee-dropping” — the female drops vertically from the nest with wings closed for a few meters and only opens her wings after she is a safe distance from her nest.

Cerulean Warblers are listed on the Audubon Watchlist and considered a species of high concern by the Partners in Flight Working Group. The main threat to the species is devastating habitat loss and fragmentation in breeding, migratory, and wintering grounds, as well as dangers from wind farms on its migratory route. Mountaintop coal-removal mining is a serious issue in the Appalachian Mountains, where 80 percent of the species breed. This practice slices the tops from ridges where the warblers nest; rubble is dumped in nearby valleys creating further environmental hazards.

Cerulean Warblers undertake an impressively long migration for their small size. They cover approximately 2,500 miles each way between breeding grounds in the north and wintering grounds in the evergreen forests of the northern Andes Mountains in Venezuela, Colombia, Ecuador, and Peru. Much of this habitat has been lost due to agricultural development and the world’s love affair with coffee. The plight of this small bird is profound on both ends of its range — imagine after flying 2,500 grueling miles discovering your inner compass took you to a mountaintop that no longer exists or to a coffee plantation instead of forest!

Fortunately, there are efforts underway on both hemispheres to combat the effects of deforestation and loss of habitat. The American Bird Conservancy (ABC), headquartered in The Plains, Virginia, is actively working to purchase and conserve Cerulean winter grounds in Colombia and other South American countries. ABC is also a partner in the Central Hardwoods Joint Venture to protect Cerulean habitat in its best remaining strongholds — the extensive forests in the central U.S., a source of Cerulean populations that then spread to surrounding areas.

In addition, the coffee and coal industries are working with biologists from the U.S. Fish and Wildlife Service and conservation groups as part of a Cerulean Warbler Technical Group. Their goal is to reverse the population declines by strategically conserving and restoring forest habitat on breeding and non-breeding grounds. In South America, conservation efforts are underway to promote shade-grown coffee. Efforts include encouraging farmers to grow more certified shade-grown crops and encouraging consumers around the world to shop for “bird-friendly coffee.” The partnership also hopes to establish carbon sequestration programs to allow industries from afar to earn credit for supporting reforestation in South America.

The fate of this plucky little bird is inextricably linked to that of much we hold dear. Its decline has galvanized the attention of nature lovers and environmental groups to protect this lovely bird and its sylvan habitat. The Winter 2011 issue of the Habitat Herald highlighted one of its last remaining homes in Loudoun County, the Blue Ridge Center. You can help ensure that the Cerulean Warbler continues to find a home here by supporting this beautiful preserve as well as organizations such as the American Bird Conservancy. With the combined efforts of conservation organizations and concerned individuals there will be a secure future in Loudoun County for the tiny bird that one researcher called “sky blue, sky high.”