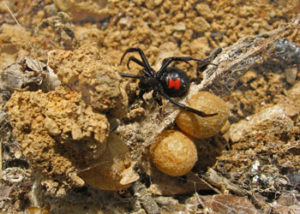 Arachnophobia, anyone? I admit that even doing the research for this article gave me the creepy crawlies, but as with most things that are scary, black widow spiders are both beautiful and fascinating. I first became interested in researching these spiders after finding one in an overturned flower pot in my backyard. Its striking appearance identified it immediately, and its reputation inspired me to learn more.

The black widow belongs to a group of arachnids generally referred to as “widow” spiders. In our area, the northern black widow (Latrodectus variolus) is most common. Like all spiders their bodies are divided into two parts: the abdomen and the head or cephalothorax. The female can be identified by her shiny black body and red or orange markings on the abdomen. These markings can be the classic hourglass shape but may also be variations of this with some having just red spots. The males and immature females can be brown to orange in color with white spots or stripes on the abdomen. The mature female has a body that measures about ½ inch and legs that also measure ½ inch.

There is a common misconception that the female widow spider eats the male after mating, leading to the “widow” name. However, this rarely occurs, unless they are in an enclosed space where the male cannot escape. Black widows spin a strong, disorganized orb web in dark, undisturbed places and rarely stray far from it. After spring or summer mating, the female will lay up to 250 eggs in an egg sac about ½ inch in diameter that she guards in her web. She may produce several egg sacs in one summer.

Black widow spiders are not aggressive and are more likely to attempt escape than to bite; however, they will bite if they feel threatened or are handled. Their venom contains a powerful neurotoxin, and black widows are considered the most venomous spider in North America. Initially, the bite may not be painful, but as the toxic effect progresses the victim may feel stabbing pains at the site of the bite, followed by painful spasms of the larger muscle groups in the back and abdomen. Tremors, fever, and nausea may also occur. Symptoms can persist from 12 hours to a few days. If you suspect you have been bitten, remain calm, cover the bite with an ice pack to reduce swelling and pain, and call a health professional. Death from a black widow bite is rare (less than 1%), but medical attention is warranted and hospitalization may be necessary in some cases.

Like all spiders, black widows help control the insect population. So what did I do with the one in my flowerpot? I very carefully transferred her to a closed container and moved her to a faraway wooded area, so she could continue her important job of catching insects in her web. If you want to prevent a close encounter with a black widow spider, be wary in places black widows prefer: dark, dry, undisturbed spots like woodpiles, stone walls and remote corners of outbuildings. Also, it is advisable to wear gloves and long sleeves when working in these places.