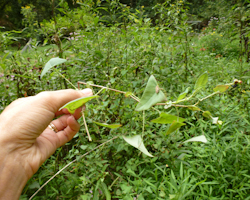 Mile-a-minute is listed by the Plant Conservation Alliance in the invasive alien plant group “Least Wanted.”

Mile-a-minute (Persicaria perfoliata, previously Polygonum perfoliatum) is a rapacious invasive which grows up to six inches a day and quickly covers other plants with a blanket of vines. The vines prevent photosynthesis in covered plants by blocking out sunlight, which eventually kills the smothered plants below. Mile-a-minute is an annual weed and is killed by frost, but its seeds can persist in soil for up to six years. The best way to control the plant is to pull it up before it produces seeds in August.  However, wear gloves and be careful when pulling mile-a-minute! It has nasty, skin lacerating barbs along stems and on the underside of its leaves. For this reason, it is also known as Devil’s Tail and Tearthumb. 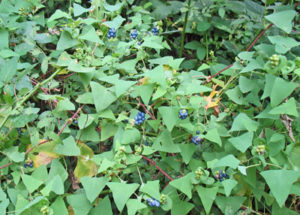 Mile-a-minute was first reported in Portland, Oregon in 1890, but it did not survive to spread. In 1930, the Asian plant was unintentionally brought to a nursery in York County, Pennsylvania. Seeds were cultivated accidentally with Japanese holly seeds, and, unfortunately, it was allowed to grow and produce seeds. Mile-a-minute is a vigorous grower and has unusual triangular leaves. The stems turn red and the plant produces highly attractive blue berries in late August. No doubt the grower observed the plant’s attractive qualities but could not foresee the consequences of his action. From York County, PA, the plant has spread and naturalized north to New York, south to Virginia and west to Ohio.

Mile-a-minute prefers to grow in a sunny spot on riparian land and does not grow in deep shade. When the plant trails over a stream it drops its seeds, and the water helps spread them. Birds, squirrels, chipmunks and deer eat the berries and inadvertently also distribute the seeds.

Like many invasive alien species, mile-a-minute was introduced by humans and then dispersed by wildlife. The worst thing about alien invaders is that their vigorous growth can crowd out and kill native plant species. Native plants are needed by native wildlife at the bottom of the food chain, like caterpillars. Dependent species cannot switch to a different food source and are then lost with the native plants.

If you see mile-a-minute growing near a stream or pond, put on a thick, long sleeve shirt and some gloves and pull up the vines before they produce berries. Remember to check back the next year, as you will have to do this again for up to six summers to completely eliminate this nasty alien invader. Plants can also be controlled by mowing before August when the seeds are set. Left unchecked, it is predicted the plant could spread throughout most of the United States and, wherever it thrives, seriously decrease biodiversity.