The striped skunk (Mephistis mephistis) is about the size of a house cat, with a large, deep body, small head, and short legs. It averages 24 to 30 inches from the nose to the tip of its tail, and usually weighs from 4 to 10 pounds. 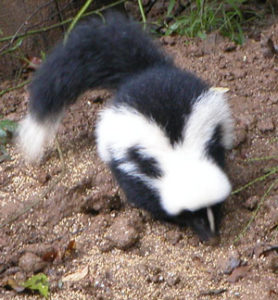 The white markings on its otherwise black coat start with a thin line on its nose with a broad white patch on the head that flares to a wedge at the back of the head. It then splits into two white stripes forming a “V” running down the back and extending part way or all the way to the base of the bushy tail. Its tail accounts for about one third of the animal’s total length and is magnificent. It is a glorious brush that the skunk carries slightly aloft as it waddles along in search of its next morsel.

The skunk is one of the species that has increased in population as more forest land has been cleared. The skunk prefers a semi-open habitat of mixed-woods, brush, and open grassland within two miles of water. Interspersion of these vegetative types favor skunk populations, but the skunk can be found in almost any habitat, including suburbs and city parks.

Skunk dens may be in a ground burrow or beneath a boulder, rock pile, wood pile, or abandoned building. Almost any dark, dry, sheltered site will do. Young skunks are taught to hunt by their mother. In late June or July, when the skunks are about seven weeks old, they are often seen walking single file behind mother at dusk — off for an evening’s feeding and training.

Striped skunks do not hibernate. In December, the females den up, sometimes eight or ten to a den. Males are more solitary. During periods of extreme cold, skunks may stay inside for days at a time, but a warm spell will bring them out in search of food.

The skunk is perhaps best known for its well-developed scent glands, situated at the base of the tail. When seriously threatened, the skunk can squirt the musk from these glands with great accuracy up to 15 feet. When in the presence of a skunk, it is wise to remain as quiet as possible. Sudden movements frighten skunks and are interpreted as a threat.

Typically, the skunk goes through a series of three warnings before resorting to spraying. First it stamps its front feet, then it raises its tail with the tip pointed downward. The third and final warning is when the tip of the tail raises up and fans out. At this point the skunk is bent into a “U,” with both its front and back facing you – this way the skunk sees where it is firing, and it does so with incredible accuracy up to 15 feet (usually aiming at the eyes). If necessary, a skunk can fire five or six consecutive times. But an older, more experienced skunk, may change its mind, forgive the intrusion, and lower its tail before slowly ambling away. When a skunk does spray, gentle breezes can carry the scent more than a mile. The musk is yellowish, has an acrid, stinging odor, and will stick like glue. It is not only offensive to the nose but also painful to the eyes.

Equipped with such an effective defense mechanism, the foraging skunk wanders, seemingly oblivious to danger. Skunks have weak hearing, poor eyesight, and a mediocre sense of smell and taste. Skunks make a variety of sounds—at times they may twitter, screech, growl, churr, coo, and whistle. Occasionally, one may churr or scold if disturbed or make grunting sounds when feeding. The skunk cannot climb and has no ground speed. It ambles along in a slow, flat-footed gait at about 1 mph. Skunks have no reason to hurry, but when necessary they can “trot” about 3 to 4 mph, and at top speed they may reach 6 mph.

In spite of its potent defense mechanism, the skunk is very easygoing, shy, yet self-confident creature. Few predators will attack a skunk. Great Horned Owls are probably a skunk’s greatest threat. The owls have no sense of smell, so no matter how many times they get sprayed, it doesn’t matter. It’s not unusual to find a great horned owl’s nest surrounded by skunk skeletons ― the remains of dinners the adults had brought to the nest for their young.

With few natural enemies, skunks are often observed along roadsides, and many thousands fall victim to the automobile each year.

Overall, the striped skunk benefits man by being one of the most effective predators of small rodents and insects. An occasional individual will attack poultry. With its well-developed defense and great adaptability, the striped skunk will probably remain an intriguing part of the fauna for future generations to enjoy.

Want to learn more about skunks? Listen to our Striped Skunks Podcast.