Get Involved with Monarch Conservation by Creating a Monarch Waystation

Here in Loudoun, we are losing our grasslands and weedy roadside areas at an astounding rate.

By creating monarch waystations, we help not only the monarchs but also a variety of other butterflies, as well as birds and other wildlife. Use Loudoun Wildlife Conservancy’s online native plant database to identify plants for our local butterflies.

The following information is provided by Monarch Watch, a national organization dedicated to the science, education and conservation of monarch butterflies.

A waystation is an intermediate station between principal stations on a line of travel. If we imagine the principal stations for monarchs to be their over-wintering sites in Mexico and their reproduction locations in the breeding season, then it becomes easy for us to visualize the value of resource-rich waystations along the monarchs’ route through their annual fall and spring migrations. 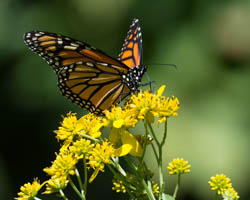 Without resources ― in the form of nectar from flowers ― fall migratory butterflies would be unable to make the journey to Mexico. Similarly, without milkweeds along the entire route north in the spring and summer months, monarchs would not be able to produce the successive generations that culminate in migration each fall.

Monarchs Resources are Declining
Milkweeds and nectar sources are declining due to development and the widespread use of herbicides in croplands, pastures and roadsides. Because 90% of all milkweed/monarch habitats occur within the agricultural landscape, farm practices have the potential to strongly influence monarch populations. This raises three main concerns:

Development
We are all familiar with development in and around our cities ― farm and ranch lands are being converted to houses, factories, shopping centers and parking lots. It is the scale of these changes that is alarming ― 3,000 acres a day adds up quickly! The rate of change was greater in the 1990s than in the 1980s, and it is probably even greater today. Urban sprawl, especially in the eastern half of the country, is eliminating habitats for monarchs and displacing wildlife. 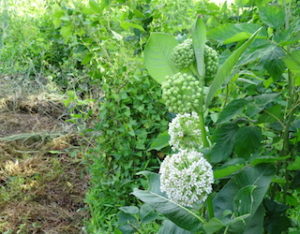 The planting of crops genetically modified to resist the herbicide glyphosphate (most commonly known by the brand name Roundup®) allows growers to spray fields of young soybeans or corn with this herbicide instead of tilling to control weeds.

Milkweeds survive tilling but not the repeated use of glyphosphate. In fact, before the adoption of these GM crops, surveys in several states revealed that croplands with modest numbers of milkweeds produced more monarchs per unit area than other monarch habitats. The loss of milkweeds in these row crops is significant, considering that these croplands represent more than 30% of the total summer breeding area for monarchs.

Roadside Management
Roadside habitats constitute 2-4% of the land area throughout the monarch’s summer breeding range, yet these areas are mowed and herbicides are applied. Although some states have started to increase the diversity of plantings along roadsides, including milkweeds, these programs are small. Unfortunately, the remaining milkweed habitats ― pastures, hayfields, edges of forests, grasslands, native prairies, and urban areas ― are not sufficient to sustain the large monarch populations seen in the 1990s. Monarchs need our help.

What We Can Do
To offset the loss of milkweeds and nectar sources due to development, use of herbicides, and roadside management practices, we need to create, conserve, and protect milkweed/monarch habitats. Monarchs need resource patches, lots of them! The goal of Monarch Watch over the next three years is the creation of at least 10,000 of these patches, which we are calling “Monarch Waystations.”

We need you to help us and help monarchs by creating Monarch Waystations in home gardens, schools, parks, zoos, nature centers, field margins, along roadsides, and on other unused plots of land. This effort won’t replace the amount of milkweed that has already been lost or even keep pace with the habitat losses each year; however, without a major effort to restore milkweeds to as many locations as possible, the monarch population is certain to decline to extremely low levels.

In addition to creating monarch habitats in those areas each of us controls, we need to lobby on behalf of monarchs ― to persuade our schools, nature centers, municipalities, and departments of transportation (DOTs) in each state to also create these habitats. Creation of restored habitats that support monarchs and other wildlife will save money at all levels of government charged with maintaining roadsides and public lands. The increasing cost of energy is putting a strain on all budgets. We need to encourage our officials to create habitats and save money by eliminating unnecessary mowing and use of herbicides.

The Value of Monarch Waystations
By creating and maintaining a Monarch Waystation, you are contributing to monarch conservation and are helping to assure the continuation of the monarch migration in North America. Your efforts will also provide habitats for other species, including many pollinators ― a rapidly declining and underappreciated, yet important, group of species. By educating others about monarchs and the need to provide habitats for wildlife, you will help raise the public’s awareness of important conservation issues.

Create a Monarch Waystation
To create a habitat for monarchs, you need to provide milkweeds for the larvae, nectar plants [such as asters, goldenrod, ironweed, Joe Pye weed] for the adults, and sufficient vegetation to provide shelter for the larvae, pupae and adults. To show that you are contributing to monarch conservation, you may choose to have your new or existing monarch habitat certified as an official Monarch Waystation.