Spiders: Weavers of the Web 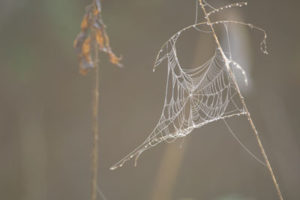 On foggy mornings, Charlotte’s web was truly a thing of beauty. This morning each thin strand was decorated with dozens of tiny beads of water. The web glistened in the light and made a pattern of loveliness and mystery like a delicate veil. ―E.B. White

In our gardens, forests, grassy fields, and homes, spiders are active: spinning their webs, hunting their prey and quietly playing their role in the ecosystem. There are over 38,000 known species of spiders worldwide, compared with just 4,000 species of mammals. Spiders are varied in their colors and sizes and most have eight eyes, but they all have eight legs and share the special ability to spin silk. Their eyes are singular, rather than compound as in many insects, The main pair of eyes are the middle pair. All spiders are carnivorous, and they use a variety of methods to catch their prey. Approximately fifty percent of spiders spin webs from their silk and use that as means to catch prey, while others use ambush techniques, as well as snares and traps.

Spiders are arachnids, not insects. Insects have three body parts and six legs, while spiders have two body parts and eight legs. There are two basic types of spiders, those that build webs and those that wander. Some live under ground in tunnels, others live on plants, and still others live in and around our homes. To produce their silk, spiders have special glands called spinnerets located at the rear of their abdomen. Spider silk is a thick liquid that hardens as soon as it is pulled out of the spinneret. However, spiders can also make different types of silk depending on their need at the time. Spiders use their silk to create webs (if they are a web-making spider), catch prey, store food, escape from danger, make egg sacs and nurseries, create hibernation areas to survive cold winters, and communicate through vibration signals that they send on the silk strands. Baby spiders, known as spiderlings, use their silk as a mode of transportation called “ballooning”. In ballooning, the spiderlings float through the air on a strand of silk in search of new territories.

Let’s explore a few of our different kinds of spiders and the techniques they use to hunt and trap prey:

Orb-weaving spiders: Orbs are one of our most recognizable webs. Whether draped between plants in our garden, cast within tall grasses, or stretched across a forest path, we often encounter these amazing constructions. Orb webs offer an effective means of catching prey. Although producing silk is energy intensive, the structure of this web is very efficient because it maximizes the surface area covered. Orb webs are often built in less than an hour and may be rebuilt daily. With orb webs, threads of dry silk are extended from a center point like the spokes in a bike wheel. These threads are not sticky, but sticky silk threads are added to connect the spokes and serve as the net to catch the insects that hit the web. These sticky threads are laid in a spiral pattern, sometimes as one continuous thread. After the web is set, the spider waits with its feet on the silk, feeling for the vibrations of caught prey. Some wait in the middle of the orb, while others wait at the edge along a trap line. These spiders do not have good eyesight, yet they build beautiful webs. Spiders that make orb webs hatch in the springtime. After dispersing from its mother, the spiderling begins to hunt on its own and builds a small web. As the summer pushes on and the spider hones its web-weaving skills, the webs become larger. Orb webs are most abundant in late summer when the females have reached their peak maturity, and their webs reach peak diameter.

Funnel-weaving spiders: Funnel-weaving spiders are often found in our lawns. Their flat webs are found suspended in the grass looking like hammocks, but if you look closely, you will see a narrow silken funnel. This is the spider’s retreat while it waits for prey. The threads of this web are not sticky. The best known spiders for making these webs are in the family Agelenidae.

Wolf spiders: These spiders do not weave webs. They hunt along the ground or in our basements looking for prey. An interesting characteristic of this spider is its eye arrangement. While most spiders have eight small eyes, wolf spiders have two very large eyes and six smaller ones. Their vision is far better than that of other spiders, which is needed since they do not use a web to catch prey. The female wolf spider carries her egg sac with her while hunting, and when her babies hatch, she carries them on her back. Wolf spiderlings stay with their mother for about a week after hatching. The mother will stay in hiding for much of this period because her babies are vulnerable and growing during this time.

Jumping spiders: These spiders are relatively small and squat with strong jumping legs. They are most active during the day, hunting for food. They can jump 20 times the length of their own bodies and can even do so mid-air when anchored to a chord of silk.  Jumping spiders have excellent eyesight, considered among the sharpest in the invertebrate world. If you look closely at a jumping spider, you can see two of its very large eyes. Male jumping spiders are colorful, often with iridescent scales, spines and tufts of bright hair, while females are more subdued in color.

Sheet-web spiders: If you live near the woods and have a grassy area, you will likely see the sheet-web spiders and their webs. These spiders spin thin sheets of silk between blades of grass or branches of shrubs and trees and then build a net of crisscrossing threads above the sheets. They cling to the sheet upside down while waiting for a meal. When an insect flies into the net, the spider runs up to the insect and pulls it through the webbing. These webs last a long time because of the thick sheet constructed. When the spider repairs parts of the web, the sheet becomes even thicker.

Spitting spiders: These spiders only have six eyes. To trap their pray, the spitting spiders shoot their webbing at their target, similar to the comic book hero Spiderman. Unlike our super hero, the spitting spider shoots streams of sticky glue from its jaws, while creating two overlapping nets of silk which trap the prey. This spider is found commonly throughout the world.

Sheet-web spiders: If you live near the woods and have a grassy area, you will likely see the sheet-web spiders and their webs. These spiders spin thin sheets of silk between blades of grass or branches of shrubs and trees and then build a net of crisscrossing threads above the sheets.

They cling to the sheet upside down while waiting for a meal. When an insect flies into the net, the spider runs up to the insect and pulls it through the webbing. These webs last a long time because of the thick sheet constructed. When the spider repairs parts of the web, the sheet becomes even thicker.

Spitting spiders: These spiders only have six eyes. To trap their pray, the spitting spiders shoot their webbing at their target, similar to the comic book hero Spiderman. Unlike our super hero, the spitting spider shoots streams of sticky glue from its jaws, while creating two overlapping nets of silk which trap the prey. This spider is found commonly throughout the world.

Daddy long-legs or Cellar spiders: Daddy long-legs have tiny bodies and very long, thin legs. They are often confused with the harvestman, which is an arachnid but not a true spider. The cellar spiders have long bodies and are common in homes. They build untidy webs in corners and when disturbed, they bounce up and down or whorl in circles which seems to make them almost invisible to predators.

The lifecycle of a spider is an interesting one. Different spiders mate and hatch at different times of the year, but summer is our most likely time to observe this. About a week after copulation, eggs are produced and fertilized. As she produces the fertilized eggs, the female wraps the tender white balls into a special silk which forms the egg sac. Female spiders are dedicated mothers and can often be seen tending their egg sac, which can hold as many as 300 spiderling eggs. Typically, the egg sac is attached to an edge of the web, but with spiders that roam, like the wolf spider, the female carries the sac along with her in her travels. With cellar spiders, the eggs are wrapped very loosely in a few threads of silk. This spider holds the sac in her jaws as she sits in her cobweb.

All spiderlings are tiny and blind when first born. As they go through their first molt, they develop further and begin to resemble their parents in colors and markings. Gradually, the spiderlings develop their eyes and the ability to spin silk. As they reach their second molt, their fangs develop, and they realize that their siblings make convenient meals. This is often the time when spiderlings start ballooning to search for new territories and to get away from hungry brothers and sisters. Most spiders will go through 3-10 molts, and with their last molt they achieve sexual maturity. Before this final molt, it is difficult to determine the sex of the spider. Most spiders live for one to two years.

Role in the ecosystem

Spiders are incredible hunters that help keep the balance in the insect world. Some scientists have estimated that spiders living in just two and a half acres of land can eat more than 100,000 pounds of prey each year. So, when you see that spider struggling to get out of the bath tub or running behind the couch, consider all the insects around your home or outside that the spider will eat in its one- to two-year lifespan. We should be grateful for these small predators and the important role they play for us.

It’s fun to observe spiders ― whether weaving webs, hunting prey or coping with their young. Webs are probably the easiest way to find and watch spiders. Webs are typically constructed in the evening, shortly after dusk. If you have a spider near a window, you may be able to watch the weaving of its web. On a cool morning, when the grass is heavy with dew, put on your boots and go for a walk and look closely at the weavings of different types of webs.

Weber, Larry, Spiders of the North Woods (One of the best books on spiders that serves as a field guide to spiders, a source for more information on spiders, their behaviors and their webs, and ideas for observing spiders).

Mason, Adrienne, The World of the Spider.