Some examples of migrating mammals include marine mammals (whales, dolphins, and porpoises), and terrestrial mammals such as the pronghorn. The most recognizable and local mammals that migrate are bats. Some of these mammals follow a specific route during the course of a migration, while others may follow a path less direct. Many stops may be made along the way depending on the breeding or feeding preferences of the migratory animals.

Whales are marine mammals known for their long migrations. Often whales embark on seasonal migrations in search for more favorable conditions of temperature, food or water. In many cases, the primary reason for a seasonal migration is to find suitable grounds for reproduction. These areas may not always be the most suitable places for feeding or other daily activities of adult whales. Whales typically migrate thousands of miles from cool waters, where feeding takes place, to warm waters, where breeding occurs.

Dolphins and porpoises have been known to migrate, although their migration routes are usually not as well defined as whales. While many dolphins stay in the same area throughout their lives, some populations have been known to move over great distances. These marine mammals form transient groups, which travel long distances, and resident groups, which remain local and follow predictable migratory paths. Like whales, dolphins migrate in search of food and better environmental conditions.

The migration of pronghorn in and out of Grand Teton National Park, with movements up to 170 miles, is the longest terrestrial mammal migration between Argentina and Canada.  Currently, the migration, and thus the viability, of pronghorn in Grand Teton National Park is jeopardized by large-scale energy development, increasing development, and imbalanced predator/prey relationships. 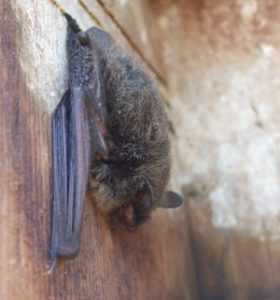 We have approximately 10 species of bats here in Loudoun and while most of them hibernate through the winter in tunnels, hollowed logs, and caves, at least two of our bat species migrate. Our migrants are the Hoary bat and the Eastern Red bat.

Eastern Red bats typically live alone or in small family groups of just a mother and her young through the summer. They live in dense foliage, tree hollows and under loose bark of trees. In fall they form groups and fly southward together although it is thought that the sexes migrate in separate groups.

The migration occurs primarily after a cold front passes through and they generally follow the same routes taken by migratory birds.  During the winter months, the Eastern Red bat seeks flying insects such as beetles, cicadas and flies for food.

Hoary Bats also migrate. In early fall they begin their migration traveling in waves that often consist of hundreds of bats.  Although they are night fliers generally, during migration they are often seen during daylight hours in flocks of birds also headed south. Similar to the Eastern Red bat, the Hoary is solitary except during just prior to and during migration when the males and females mate.

They overwinter in coastal areas ranging from South Carolina through Florida and into Mexico. The spring migration is slower and more predictable than that of the fall. During the spring, the females, pregnant with young, migrate northward with the males migrating northward just behind them.