Many types of fish migrate on a regular basis, on time scales ranging from daily to annual, and with distances ranging from a few yards to thousands of miles. The purpose usually relates to either feeding or breeding; in some cases the reason for migration is still unknown. 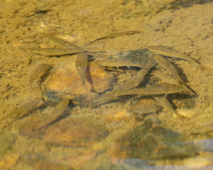 Migratory fish are classified as:

The best-known anadromous fish are salmon, which hatch in small freshwater streams, go down to the sea and live there for several years, then return to the same streams where they were hatched, spawn, and die shortly thereafter. Salmon are capable of going hundreds of miles upriver, and human dams must install fish ladders to enable the salmon to get past them.

The most remarkable catadromous fish are freshwater eels, whose larvae drift on the open ocean, sometimes for months or years, before traveling thousands of miles back to their original streams.

Vertical migration is a common daily behavior; many marine types move to the surface at night to feed, then return to the depths by day.

A number of large marines fishes, such as the tuna, migrate north and south annually, following temperature variations in the ocean. These are of great importance to fisheries.