This article is composed of a series of smaller articles dedicated to migration. Links to the other articles are at the bottom of this page.

Migration is one of nature’s greatest mysteries. Every year birds, mammals, fish, butterflies and other insects move to climates where temperatures are more hospitable and food is more abundant, to set up new homes and breed or raise their young. Migration may last as long as an entire lifetime or as short as a few weeks.

One of the most impressive feats is the ability of birds to travel hundreds or even thousands of miles to distant lands where they breed and spend the winter. We tend to think of migration as the seasonal movement of birds each fall and spring, when actually, these are just the peak times. Any month of the year you’ll find some of the western hemisphere’s five billion birds in the process of migrating. Their journeys can take weeks or months to complete, depending on the species and the difficulties they encounter along the way.

Roughly half of the breeding species in North America travel substantial distances every year for the winter months. According to recent data, 338 species of North American birds—including more than 75 percent of the forest-dwelling birds that breed in Virginia—migrate south of the Tropic of Cancer (an area know as the “neotropics,” which includes the Caribbean, Mexico, Central and South America) for the winter.

The majority are songbirds (such as warblers, thrushes, tanagers, and vireos), but there are also many shorebirds (such as plovers, sandpipers, and terns), raptors (such as hawks, kites, and vultures), and a few waterfowl (cranes, ducks, geese, and teal).

For those migrants that live in the southern part of the United States, their migration may be only as far as a few hundred miles, while others may travel as far as 10,000 miles each way.  Some of the birds we see around here that make these amazing long-distance journeys include: Chimney swifts (5,000 miles each way) , Bobolinks (5,000-6,800 miles), Scarlet tanagers (600-4,350 miles), Ruby-throated hummingbirds (2,000 miles).

Different species fly at different altitudes during migration.  They seek the altitudes with the best wind conditions for their flight. Using tailwinds (winds blowing in the direction the bird wants to fly) to make the trip shorter and therefore requiring less energy. The birds fly higher when there are tailwinds to take advantage of their speed, and lower when there are headwinds because the headwind will be less strong closer to the earth.  Birds that migrate at night are typically flying at higher altitudes. The air is calmer and the chance of a tailwind will be found at higher altitudes.  Birds also fly higher over large bodies of water.

Why do Birds Migrate? 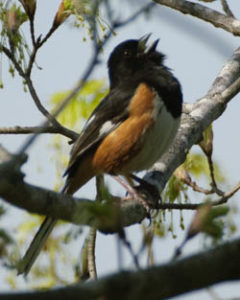 Long distance migrants have an internal clock that controls the onset of migration and the pre-migration preparations. Environmental factors set this clock – certain changes in a bird’s environment stimulate the production of hormones, which in turn leads to changes in behavior and physiology, preparing them for migration.

Impending cold weather is one of a number of factors that encourage birds to migrate. The main trigger is food depletion, such as when insects go into hibernation or when snow cover makes seeds inaccessible. Decreasing daylight means that there is less time to feed, and birds begin to have difficulty maintaining sufficient energy stores to cope with lower temperatures.

This cause-and-effect relationship creates another signal that it’s time to head south. Once the instinct to migrate is triggered, activities such as feeding, resting, and aggression are often suppressed, allowing the bird to focus on little else but reaching their destination.

One reason many of us don’t notice migration is that much of it occurs at night when conditions are more favorable – the temperature is cooler, the air calmer and there are fewer predators. Warblers, vireos, thrushes, and tanagers are all nighttime flyers, as are shorebirds. Daylight migrants include ducks, geese, cranes, loons, as well as the birds that feed on flying insects such as swallows, swifts, and nighthawks. Soaring birds, such as hawks and vultures, must migrate during the day to take advantage of the warm thermal updrafts created by heat from the sun.

Most long distance migrants are born genetically programmed to fly in a certain direction for a certain period of time. Their first migration is completely under genetic control. But as the birds gain experience, they incorporate that learned behavior.

Although the intricacies of how birds navigate during migration remains a mystery, all migratory birds use a variety of cues, and different species seem to rely on some cues more than others. These cues seem to include the pattern of stars, the earth’s magnetic fields, location of the setting sun (and light patterns), topographic features of the landscape (coastlines, rivers, mountain ranges), and prevailing wind patterns (which are seasonal – during migration, the wind tends to blow in the direction of the migration route).

Overcast or foggy nights can hamper the progress of birds that rely on the stars for navigational cues. Birds receive assistance from seasonal wind patterns that blow in the general direction they need to travel. Whatever the means of navigation, it is extraordinary that many species are capable of returning not only to their home ranges, but to their exact nesting or winter feeding sites.

Migrating flocks have declined by nearly 50 percent since the 1960s. Death during migration takes a heavy toll. It is estimated that half of all migrants heading south for the winter will not return to breed in the spring.

Birds face many hazards during migration. Some may get blown off course or get caught in a storm. Some birds don’t have enough food or fat stored to complete the trip. Predation and bad weather are two natural causes of mortality during migration. Collisions with tall buildings, windows, and other structures, being shot or trapped by hunters, and getting struck by automobiles are but a few of the numerous human-influenced dangers to migrating birds.

However, the greatest threat is loss of habitat. Changes in forestry, agriculture (overuse by livestock) and urban development greatly impact migration. These changes affect the habitats of birds (as well as other wildlife). Migrating birds depend on the forests and wetlands and sometimes cannot adapt to the changes.

In addition to the disappearance of habitat in seasonal ranges, migratory birds are losing their “rest stops.” About half of all birds depend on wetland habitats to some degree, and Neotropical migrants look for remnants of forested areas. Snow geese, for example, rely on marshy areas for aquatic plants and invertebrates – they may fly day and night before finding their next stopover point.

What We Can Do?

We need to protect wetlands, forests, and other valuable habitats that birds need during their journeys. We also can help migratory birds by adding water, natural food sources, and cover in our backyards and community green spaces, so that they can serve as stopover points. The natural challenges of migration are many. If we can eliminate or minimize the hardships that we’ve created, birds may be able to more easily make their spectacular journeys between distant lands.

To Learn and Do More:

Winged Migration: For those who haven’t seen this movie yet – definitely check it out.  This is not your Disney “talking goose” movie.  This is an amazing film that tells the story of migration that takes place across our planet and it is told from bird’s eye view, weather flying at 10,000 feet or arriving in a new country 5,000 miles from where they started.  This story is told through incredible imagery and music.

Learn more about bird migration: The bird information provided in this article came primarily from the Smithsonian Migratory Bird Center, National Zoo, Washington DC and from a book entitled, How Birds Migrate, by Paul Kerlinger.  Both of these sources have a wealth of information on bird migration.

Journey North: “A Global Study of Wildlife Migration.”  This is a terrific online source of information and activities on migration of all sorts of species. You can even submit your own sightings and observations and view maps of other reported sightings.  http://www.learner.org/jnorth/

Gardening for Birds: Fall is a terrific time to watch migrants making pit stops in your gardens for food and water.  With birds, they are attracted to feeders for nuts and seeds, but they are also attracted to the berries and other fruits found on bushes, trees and vines.