Dragonfly migration is less understood. Like Monarchs, they begin to travel south in late summer. Dragonflies find their way south using natural landscape features, such as seacoasts and large rivers. Migration takes place in large swarms. In the swarm there is no actual leader, just many of the same insect traveling together. 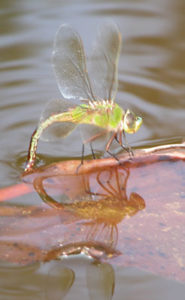 One of the interesting features of dragonfly migration is that it seems to follow the passage of cold fronts. It has been noted that even in two separate geographic areas, two separate swarms of dragonflies began to migrate in response to the same cold front. Much like the Monarch, the adults that head south in the fall will not be the same ones to return in the spring. It will be their offspring completing the trip.

The majority of dragonflies do not migrate.  They live their lives around the ponds where they were born and they lay their eggs in the same areas for future generations to follow them. But, across the US there are about a dozen that species that do migrate and the Green Darner dragonfly, which we have in our area, is one that does. That is not to say that all Green Darners migrate. There is a resident population that will stay in our area, breed, and lay its eggs in our ponds for the following year; but there is also a migratory population that heads south in the fall.

While very little is known about this migration, the timeframe has been recorded as being between late July and early October and it typically follows a cold front.  Sometimes the migration takes place in huge mass flights of hundreds of thousands or millions of dragonflies that congregate along seacoasts or lakeshores and then fly enmasse, while other times it takes place in smaller groups or as scattered individuals moving along parallel lines but with no aggression towards each other.

Other dragonflies of our area have been identified in these large groups as well but not in the same numbers as the Green Darner.  These lesser migrants include the Eastern Pondhawk, Blue Dasher, Black Saddlebags, Twelve-Spotted Skimmer, Calico Pennant and others.

Very little is known about the migration of Green Darners because they move over such a broad area, but it is recognized that the migration is a one-way trip.  Those that head South to Florida or Mexico will not make the return trip.