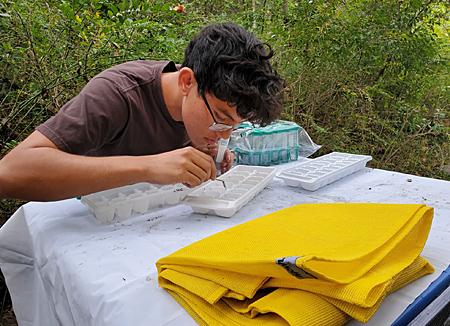 Anthony Santos, a senior at Broad Run High School and the Academies of Loudoun, became certified as stream monitor with Loudoun Wildlife’s Stream Team last spring. This summer he scouted out an appropriate stream site that had a good number of riffles and easy access. Then this fall he established a new stream monitoring location on a tributary of Beaverdam Run in Ashburn.

At the initial survey of this tributary, Anthony’s team tallied a total of 273 macros. Despite the presence of some pollution-sensitive species like mayflies and caddisflies, the majority of the sample was composed of species that are less sensitive to or tolerant of pollution including netspinning caddisflies, flat worms, midges, and scuds. The stream received a score of 6 out of 12, indicating unacceptable ecological conditions.

In addition to the data collected about the ecological condition of this stretch of the Beaverdam Run tributary, Anthony also collected a small number of different types of macros for further analysis in the laboratory. His Senior Research Engineering project focuses on detecting PFAS levels in benthic macroinvertebrates. PFAS, or per-and polyfluoroalkyl substances, are a group of chemicals used to make fluoropolymer coatings and products that resist heat, oil, stains, grease, and water. 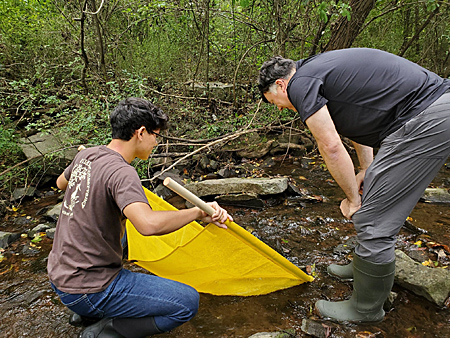 Preparing the collection net for sampling.
Photo by Amy Ulland