Pickerel Frog and Salamander Show Up for Black Branch Survey

Can you spot the Northern Two-Lined Salamander?
Photo by Amy Ulland

Although Loudoun Wildlife’s stream surveys focus on collecting, identifying and tallying benthic macroinvertebrates, sometimes other creatures decide to make themselves known to our volunteers. This was recently the case at our Black Branch site, where our volunteers were delighted to discover a Pickerel Frog and a Northern Two-Lined Salamander hiding in the creek!

The macros at Black Branch were a little less willing to cooperate and the team of six volunteers conducted the maximum of four 90-second sampling events, which yielded a total of only 162 critters. Over half of the sample consisted of netspinning caddisflies, which are somewhat tolerant to pollution. Beetles, which are sensitive to pollution, made up a little less than a quarter of the sample. A few dragonflies, damselflies, mayflies and crayfish were also present. 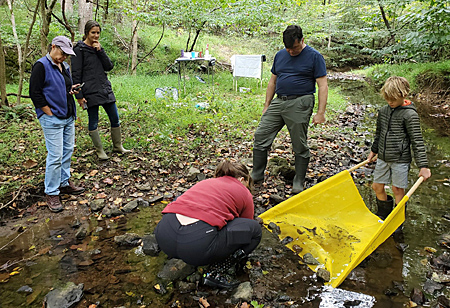