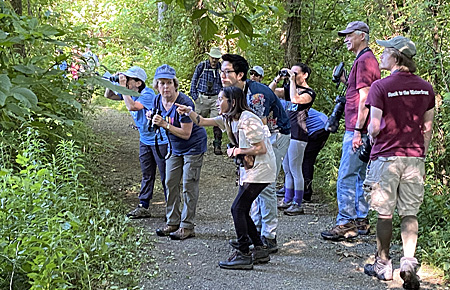 Saturday’s monthly bird walk on the 25th was a good reminder that late June is a productive time to bird at the Blue Ridge Center for Environmental Stewardship. The 13 individuals who joined Joe Coleman, Michael Sciortino and Scott Harris for the walk recorded a whopping 59 species. The group traveled along our standard route past the Wortman Pond where two Green Herons quietly rested and preened. Demory Field was active with Indigo Buntings, Field Sparrows, and a few Yellow-breasted Chats. A Great Crested Flycatcher sat high in the treetop and squawked. It took a bit of searching, but we did find it to the delight of some that had not yet seen this summer bird.

We headed towards the woods and traveled along the Farmstead Loop and as we did, we began hearing an Acadian Flycatcher calling from nearby, and we saw our first Ruby-throated Hummingbird. Red-eyed Vireos were plentiful, and we ultimately recorded 20 individuals by the time we finished. The area near the old bridge was quiet except for the resident Eastern Phoebe perching and darting from one branch to the other in pursuit of insects. Sadly, the Louisiana Waterthrushes were quiet on this day, and we were not able to see or hear any. However, we knew they were there. 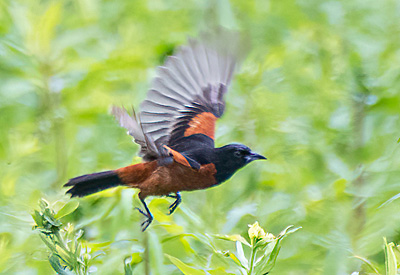 Piney Run Spur was the place to be for warblers. As we traveled along the spur, we did hear Cerulean, Worm-eating, and Kentucky Warblers calling from the canopy and from deep in the woods—this was very exciting for the group. For many this was their first encounter with the sound of the sulky Worm-eating Warbler, and for others it was their first observation of the year. We also heard multiple Northern Parulas calling from high above, but we were not able to visually locate them. We heard a lone Ovenbird as well to round out the warblers.

As we exited the woods back onto Demory Field, we finally began seeing Turkey Vultures and other activity in the sky. The highlight was what turned out to be three Bald Eagles flying over the mountain top towards the West Virginia border. The group locked onto the first eagle, and as we scanned the horizon, we noticed two more circling and dancing in the warm current. The eagles were joined by multiple vultures.

We compared our extensive notes and reconciled our eBird lists at the education center. While we did that, we recorded our bonus species: two Orchard Orioles perching and flying over the field. The orioles were our final species of the day, and it proved to be a productive day of birding.

For the list of birds recorded, view on eBird at https://ebird.org/tripreport/65180 or see the combined list below. 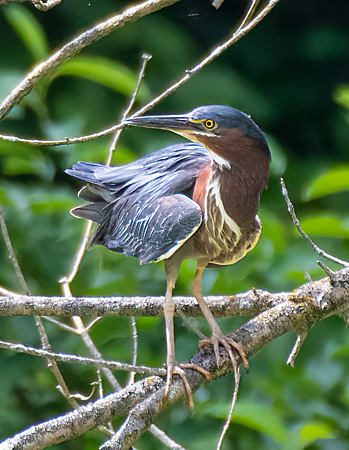