The Flying Kites’ first Birdathon was a success. Abigail (9), Rua (7), Sadie (5) and Henry (2) joined their parents Kiersten and Eric Anderson on a memorable two-day blitz that ended with 91 species seen or heard by the group. 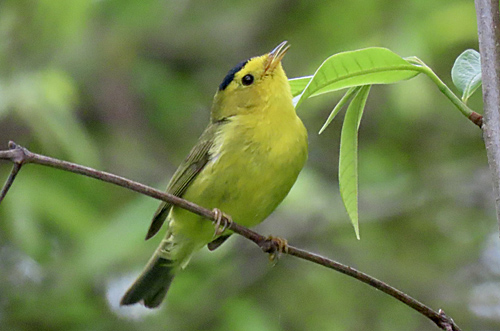 Day one began with Abigail, Rua and Eric heading out before sunrise to Algonkian Sanctuary Trail in hopes of an owl. Birds were active as we walked the trail past the three ponds on the way to the Potomac River, and the girls became quite familiar with the Red-eyed Vireo’s constant “here I am, where are you.” We ate breakfast at the end of Sugarland Run, and watched Northern Rough-winged Swallows zip back and forth along the confluence as a Prothonotary Warbler sang loudly across the run. As we started our trek back, the girls were thrilled to see a watchful Barred Owl perched in the trees – a perfect reward for their early morning! Little did we know this would be the first of three Barred Owls we would see that day. We were feeling good about our morning, when Abby found possibly our favorite bird of the day, a male Wilson’s Warbler, decked in yellow and green with a black cap, singing and providing great looks as it hopped around the low understory.

With over 50 species already on our list, we headed back to pick up the rest of the Flying Kites and then over to Algonkian Regional Park. (Sadie and Henry were waiting in the front yard ready to go in owl and peacock costumes.) At Algonkian, we checked off Purple Martins making laps over the driving range and a Yellow-billed Cuckoo that came in for a pleasantly nice look. To everyone’s surprise, we were treated to another Barred Owl, this time perched close in a clump of trees eating a European Starling breakfast (the only bird we saw and identified but didn’t count in our tally). 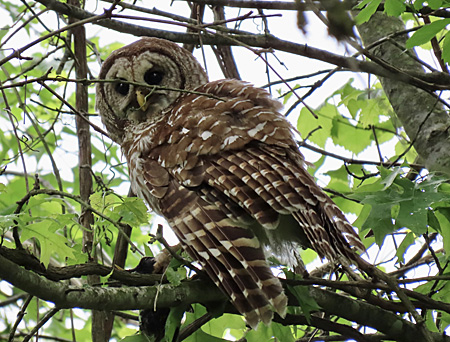 The day closed with trips to Bles Park, Broadlands Wetlands Nature Preserve and Middlesex Drive Pond. At Bles Park, we were stunned and delighted by our third Barred Owl of the day. The whole family was also treated to close looks at a few active Indigo Buntings whistling their bright, lively song. At Broadlands Wetlands Nature Preserve and Middlesex Drive Pond, we saw Great Egrets, goslings, Killdeer, a Greater Yellowlegs and a Semipalmated Plover. Henry and Sadie took an advanced approach to birdwatching at Middlesex as they rolled down the grassy hill, providing them 360 degree views of the world around them. The day ended with the two recently arrived domestic Swan Geese territorially chasing the kids back to the car.

On Day two, we pushed to the western parts of Loudoun for the kids’ first trip to the Blue Ridge Center for Environmental Stewardship (BRCES). This was voted everyone’s favorite spot of the Birdathon due to its beautiful views, extensive forest trails and nature playground. To everyone’s dismay, however, it was also accompanied by an object lesson on why the swallows had returned to the fields as we swatted away swarms of gnats from our faces. In the woods, we picked up many new birds, including two very cooperative Kentucky Warblers and a Louisiana Waterthrush dashing back and forth along the banks of Piney Run. 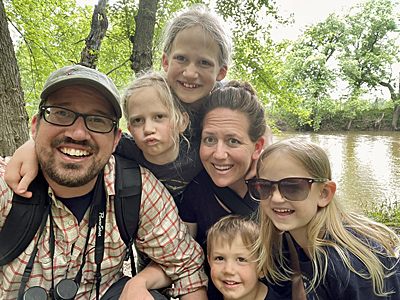 Finishing at BRCES, we then drove out to Piney Swamp Road to try our hand at two Trumpeter Swans – the kids were excited to still pick up a swan after we missed the resident Mute Swan at Middlesex Drive Pond. We got the swans, and were excited to also see a Red-headed Woodpecker, a Baltimore Oriole, and a mother Wood Duck with eight young ones following close behind. Eastern Meadowlarks sang in the fields as we drove off to our final location Meadowbrook Farm Ponds in Leesburg, where we picked up our last bird, a buzzy Grasshopper Sparrow.

The two days wore us all out but the whole team, kids and adults, came away treasuring the experience and glad we could use our love of birds to support such a great cause. We’re hopeful this will become a new family annual event – at least until we find our team’s namesake, the Mississippi Kite.