The elusive Eastern Spadefoot (Scaphiopus holbrookii), often referred to as a toad, is in fact a primitive fossorial frog. What does fossorial mean? It means that an animal is adapted for digging (fossorial comes from the Latin word fossor which means “digger”). The Eastern Spadefoot is adapted for a life spent mainly in underground burrows which they dig with specialized “spades” known as calcified tubercles on their hind feet. This is one of the reasons that these frogs are a challenge to locate and study. They also have a very short breeding period, which can often be overlooked due to the swiftness with which they breed and the weather conditions while they are breeding. The Eastern Spadefoot engages in what is often referred to as an explosive breeding event. The frogs are triggered by heavy rains and migrate to temporary pools for breeding. Hundreds of individuals will breed in these pools and return to their burrows, often within 24 hours. Their egg masses are relatively small and nondescript making them easy to overlook. 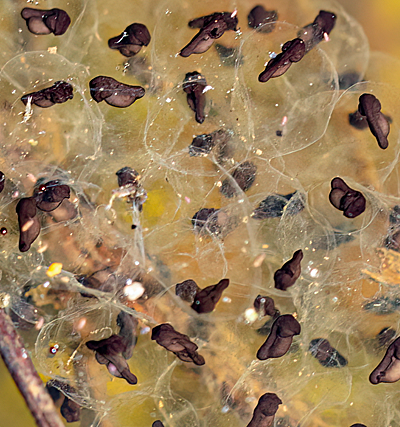 Why all this talk about Eastern Spadefoots? Because members of Loudoun Wildlife Conservancy’s newly formed Herpetology Survey Team located the first verified sighting of them in over 10 years in Loudoun County, as verified through historical records and organizations that track spadefoot populations. The first observation of five individuals occurred at JK Black Oak Wildlife Sanctuary in early April. There was some calling from the Eastern Spadefoots, but as we would learn in the following days, these was no proof of breeding activity.

In early May, members of the Herpetology team got the tip they had been waiting for. While out in the early morning for the Birdathon, one of the birders identified what would turn out to be hundreds of Eastern Spadefoots migrating to the vernal pools at Algonkian Park and actively engaging in breeding activity. After five hours of standing in the vernal pool areas in the chilly rain, we were able to record breeding calls and gain photographic evidence of this explosive breeding event. This activity led to the Herpetology team’s return to the JK Black Oak to determine if there was any breeding activity there. Sure enough, the calls of the Eastern Spadefoots were so loud that they could be heard from the parking area when we arrived.

Another distinct attribute of the Eastern Spadefoot is that they have vertically slit pupils, similar to a domestic cat. As the Herpetology team discovered, the eyes of the spadefoots shine when a flashlight passed by them. This made it far easier to count the populations in each of the pools, plus it allowed the team to safely walk around without accidentally stepping on the spadefoots that were migrating to and from the vernal pools.  The team counted a total of over 300 individual spadefoots during their observations. After the short (approximately 18 hours) breeding session was over, and the adults had disappeared from the vernal pools, the work of collecting data and documenting the development of the spadefoots began. 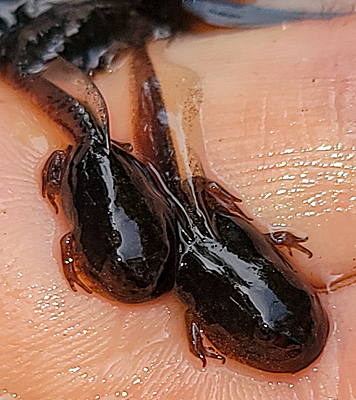 A few members of the Herpetology team spent countless hours over the next month, visiting the property twice a day to document the rapid changes of the developing frogs. Air and water temperatures were taken at each vernal pool and comparisons of development were documented. Exactly one month after the explosive breeding event occurred, the little froglets made their way onto land, and their progress continues to be monitored as they grow. Very little is known about their behavior as they develop in upland wood areas.

Some of the interesting facts that we learned are: 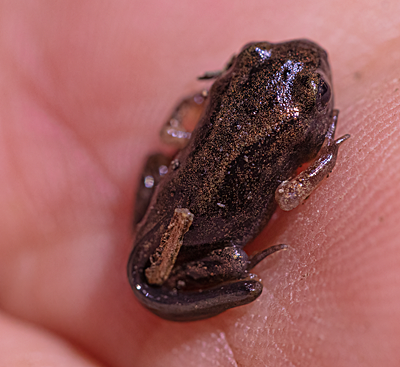 Spadefoot about to leave the water.
Photo by Jenny Erickson

This unique opportunity to observe Eastern Spadefoots was only possible because JK Black Oak, with its vernal pools, had been preserved from previously planned development. The Eastern Spadefoot is one of the vernal pool indicator species for the Mid-Atlantic. (Indicator species are organisms that require temporary aquatic habitats for reproduction and development of their young.) Other vernal pool indicator species identified at JK Black Oak  during the first two years of amphibian surveys are: Jefferson Salamanders, Wood Frogs and fairy shrimp. Sadly, vernal pools are declining at a rapid rate which has led to local extirpation of these amphibians in many areas.

There are several ways to help our Eastern Spadefoot populations in Loudoun County.  Since we have little information regarding potential populations in Loudoun County, you can help by learning to identify their unique breeding calls (listen to recordings to familiarize yourself with the calls) and record any call that sounds like an Eastern Spadefoot. Then email the recording to Program Coordinator Jenny Erickson at jerickson@loudounwildlife.org for verification. This will help us attempt to locate other potential populations in the county.  It is also important for you to speak up regarding development projects that could jeopardize vernal pools and their surrounding habitats. Preserving these areas is necessary for saving our local Eastern Spadefoot populations.