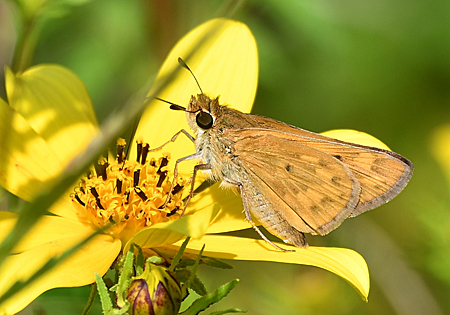 The first Birds, Butterflies and Dragonflies walk at JK Black Oak Wildlife Sanctuary was held on August 28.  Led by Larry Meade and Gerco Hoogeweg, 14 people came out to enjoy the beautiful weather and look for wildlife. With goldenrods and other native plants in bloom, we hoped for a nice diversity of species. In the western meadow and around the tree planting area we saw many butterflies, mostly one species – Sachem. This was the most common butterfly during our walk. We also found Hackberry Emperors, an Eastern-tailed Blue, a Red-spotted Purple and several Eastern Tiger Swallowtail. Near the LeSabre pond we found several Least Skippers.

Dragonflies were not very active, and we ended up seeing only three species with the Blue-faced Meadowhawk being the most common one of the day. This dragonfly, with its red body and blue head, is easily recognized.

Despite our later start we did well with birds. As usual at JK Black Oak we saw plenty of Gray Catbirds, heard several American Goldfinches as they few over and several wrens  singing.  We were delighted to see a Coopers Hawk, Osprey and one of the resident Red-tailed Hawks. Near LeSabre pond we were surprised by a juvenile White-eyed Vireo. The bird did not have the full song down just yet, and its notes were a little off.  It was still fun to hear and see this bird. While scouting for dragonflies and butterflies at LeSabre pond, we saw Hairy Woodpeckers, Eastern Wood-pewees and heard Pileated and Red-bellied Woodpeckers.

The complete list of birds can be viewed on ebird: https://ebird.org/va/checklist/S93919252